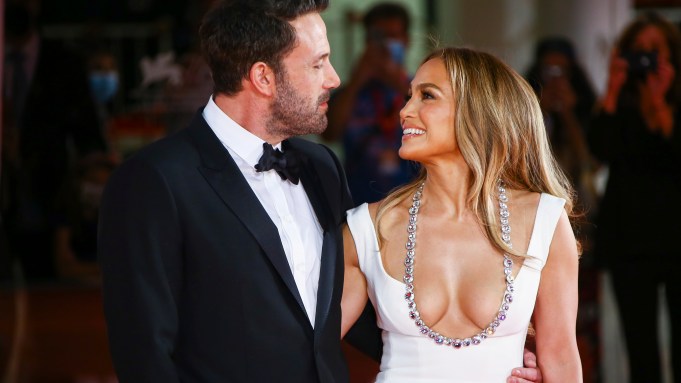 Jennifer Lopez wore not one, but two different bridal looks for her wedding to Ben Affleck.

On Sunday, the singer-actress confirmed on her official newsletter, “On the JLo,” that the couple tied the knot in a small ceremony at the famous Little White Wedding Chapel in Las Vegas on Saturday.

The first dress she wore was a white, sleeveless boatneck dress from Alexander McQueen she claimed to have been saving for a long time. Videos were shared on her newsletter as well as her hairstylist Chris Appleton’s official Instagram, which he captioned: “Last minute feelings before the wedding.”

Lopez claims the McQueen look was “from an old movie,” though it is unclear which one. She wore her hair in curls with half of it styled up in a bouffant.

She then changed into the Zuhair Murad look, which was a white lace off-the-shoulder gown with long white sleeves and a sweetheart neckline from the Lebanese label’s spring 2023 bridal collection. The dress also featured a corset bodice, fishtail train and matching white lace veil.

Affleck, on the other hand, wore his own white tuxedo, which was shown in the pictures and a video he took on his phone of the bathroom he changed in.

Lopez is usually styled by Rob Zangardi and Mariel Haenn, both of whom posted pictures of the happy couple on their respective Instagram accounts to congratulate them.

“We did it,” she wrote in her newsletter. “Love is beautiful. Love is kind. And it turns out love is patient. Twenty years patient. Exactly what we wanted. Last night we flew to Vegas, stood in line for a license with four other couples, all making the same journey to the wedding capital of the world.”

The couple announced their engagement in April 2021. The two were previously together from 2002 to 2004 and were one of the buzziest couples of the early Aughts era, with tabloids referring to them as “Bennifer.” They were engaged in 2002 and had a wedding date set for September 2003, but it was postponed due to high media attention. In January 2004, the two called off the engagement.