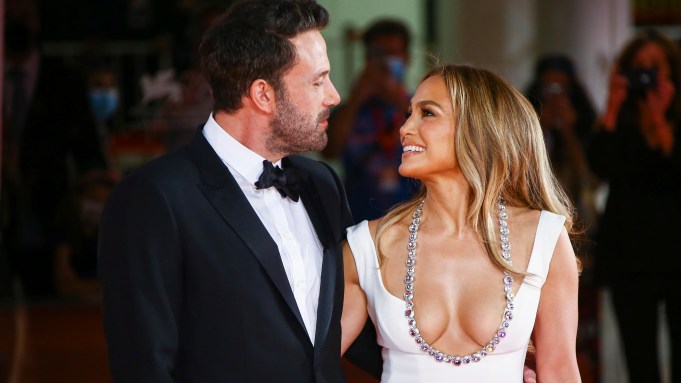 Jennifer Lopez wore not one, but three different dresses for her wedding.

The singer-actress looked to Ralph Lauren to create all her looks for her second marriage celebration to Ben Affleck in Georgia over the weekend, held at the actor’s private 87-acre compound on Hampton Island Preserve.

Lopez’s first dress was a turtleneck column gown with a dramatic ruffle hem featuring 1,000 hand-cut handkerchiefs and a voluminous skirt created from 500 meters of fabric cut into ruffles. The sleeves are inset with a cascading ruffle, draped from the back of the turtleneck to the shoulder to create a heritage-inspired look.

Her second look was a chandelier pearl gown adorned with thousands of cascading strings of pearls. According to a statement from Ralph Lauren, it took approximately 700 hours for 30 artisans to hand embroider the dress with micro-pleats of silk tulle, tiny pearl embellishments and Swarovski crystals.

To conclude the night’s festivities, Lopez changed into a sleek mermaid gown with a keyhole neckline embellished with Swarovski crystals of different shapes and shades of white, complete with a full skirt and topped with an organza overlay.

Lopez was styled by Rob Zangardi and Mariel Haenn, with the former posting pictures of the actress on his official Instagram account.

Affleck also tapped the famed American fashion designer to dress him for the nuptials. He wore a classic tuxedo with a formal one-button peak cream dinner jacket paired with a black double-pleated trouser and narrow piqué bib shirt. He topped off the look with a black bow tie and black patent shoes.

On Tuesday, Lopez posted on her Instagram account teasing a look at her dresses on her official newsletter, On the JLo.

The couple’s wedding weekend reportedly kicked off with the two hosting a rehearsal dinner on Friday. The following day, Lopez and Affleck exchanged vows in front of their family and close friends. The ceremony was followed by a reception, and celebrations concluded with a picnic and barbecue on Sunday.

Among some of the guests that attended, many of whom arrived on Saturday and stayed in Savannah, include Matt Damon and his wife Luciana Barroso, Jimmy Kimmel, Jason Mewes and his wife Jordan Monsanto, and Kevin Smith, among others. Both Lopez’s and Affleck’s children were also present. All were dressed in white to adhere to the all-white dress code for the weekend.

The wedding, which comes a month after the couple’s ceremony in Las Vegas and their honeymoon in France, was extremely private as the couple reportedly purchased permits to block airspace and river access to the estate.