The jewelry brand invited the actress/poker player because she is also an avid collector who lent one of her vintage pieces to the company. 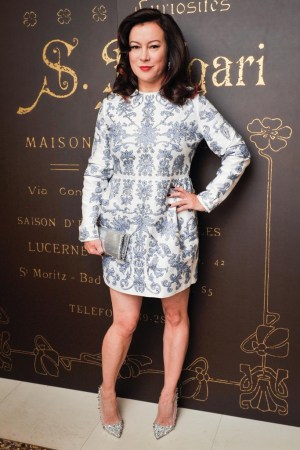 Gucci, Balenciaga Said to Team Up

Cardi B Teams With Reebok on Apparel Collection

Jennifer Tilly was the life of the party Tuesday night at a private dinner at the Bulgari store on New York’s Fifth Avenue.

Primarily an editors’ dinner with the brand’s U.S. president Alberto Festa, Bulgari invited the actress/poker player because she is also an avid jewelry collector who lent one of her vintage pieces to the company.
But it wasn’t just any piece, she explained, while giving a brief speech.

“When Elizabeth Taylor’s jewels came up for auction, I thought to myself, ‘I have to get something from that time period [with Richard Burton],’” Tilly said. But there was one person who managed to snag everything. It was the Bulgari archive. But then the Eddie Fisher brooch came up.”

Tilly explained that while the Eddie Fisher romance with Taylor wasn’t as exciting, she managed to snag the brooch that Fisher gave to the movie icon. That piece is on loan to Bulgari and appears in a current exhibition at the de Young Museum in San Francisco.

She also recounted her subsequent unsuccessful bids that day at procuring one of Taylor’s caftans.

Those were all scooped up by Naomi Campbell, she said, despite the fact that she had worked out a bidding strategy with Sofia Coppola and Anna Sui — kind of like divide and conquer.

Other amusing tales from the actress, who is now starring in the play “Grasses of a Thousand Colors” at New York’s Public Theater, included her recent brush with Cynthia Nixon.

“She looks so beautiful,” Tilly said. “Lesbianism agrees with her.”