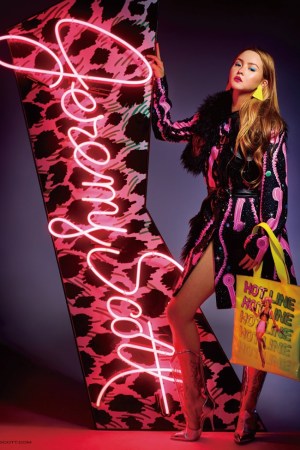 Everything to Know About Amazon Prime Day 2021

Jeremy Scott and Devon Aoki go way back. “I basically saw a photo of her when she barely started modeling at 13 and I was just mesmerized,” Scott said of Aoki, now 33. “I fought and fought to get her into Paris to do my third show and that was her first fashion show ever.” Scott said he’s been nudging Aoki back onto the modeling scene, although “she may be a little reluctant.” Last month, he cast her to close his Moschino resort and men’s spring 2017 show in Los Angeles, and now she’s appearing in the fall campaign for Scott’s own label, photographed by the designer himself.

This marks the first time Scott has shot his own ads, although he has photographed Aoki before. Specifically, his nostalgia for the i-D cover for which he shot her in July 2007 for the 10th anniversary of his collection sparked their photographer/subject reunion. Photographed in the designer’s L.A. studio, with hair by Chris Appleton and makeup by Kabuki, one ad features Aoki cast in the purple light of a neon Jeremy Scott sign. She’s wearing a trench decorated with pink landline telephones and holding a tote emblazoned with the words “Hot Line.” In another, Aoki is posed on the side of a couch that looks like the tail of a Fifties car. “There wasn’t a really big plan,” said Scott of the concept.”I just grabbed all the clothes and we were just kind of playing.” The campaign will run in fall issues of V, i-D, Purple, Another and The Daily magazines.

Aoki isn’t completely retired but her modeling gigs are rare. Her last campaign was for Kenzo in spring 2014. She and her husband James Bailey have three children, and Scott is godfather to their eldest daughter. In addition to appearing in Scott’s campaign and the Moschino resort show, Aoki was also cast in Fergie’s ““M.I.L.F. $” video, which dropped last week. In this case, Fergie changed the acronym of M.I.L.F. to stand for “Moms I’d Like to Follow,” exemplified in the video by Aoki, Fergie, Kim Kardashian, Chrissy Teigen, Ciara, Alessandra Ambrosio, Gemma Ward, Tara Lynn, Angela Lindvall, Isabeli Fontana, Amber Valletta and Natasha Poly, all neighbors in “Milfville.”