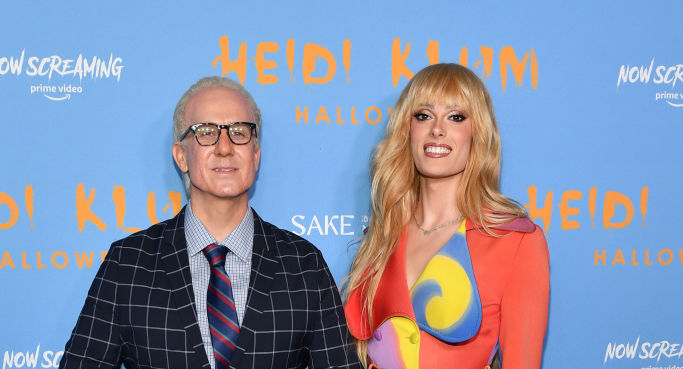 In honor of Klum’s Halloween festivities, Scott and Gigi Goode dressed as Tim Gunn and Klum herself. Gunn and Klum have long been known as a dynamic reality television duo beginning with their days on “Project Runway” and currently on their Amazon Prime Video design competition series, “Making the Cut.”

Scott arrived on the red carpet with slick-backed gray hair, square-frame black glasses, a windowpane check suit, a blue and red striped tie, a pin-striped shirt and a pair of brown loafers emulating Gunn’s fashion aesthetic. He even stopped to mimic Gunn’s mannerisms, clasping his hands the way Gunn often does as Goode posted next to him.

Goode, accompanying Scott, wore a mixed pattern belted trench-inspired dress in a variety of colors including blue, yellow, red, purple and green from Moschino. She complemented the look with a color-coordinating handbag. She finished off the look with a pair of quadruple-strap heels in lilac, blue, red and orange.

Goode also chose a wig that was a near replica of Klum’s blond hair with bangs in the front and a long flowing style on the sides and back.