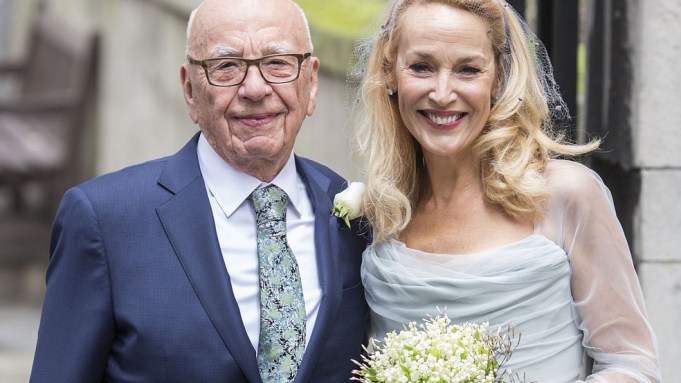 She paired the cloudy blue chiffon dress with silver Roger Vivier buckle flats, and wore a blue hairband and a short veil. Her eldest son James Jagger walked her down the aisle, and her daughters Georgia May Jagger and Lizzie Jagger were among the bridesmaids. They wore light blue Westwood creations that gathered with a sweep of fabric at the hip.

Hall and Murdoch officially wed in a civil ceremony at London’s Spencer House on Friday, with Hall dressed in a collarless white coat over a blue dress, and black patent leather Roger Vivier buckle flats. She carried a purple crocodile two-tone Analeena handbag.

Suzanne Accosta Wyman, Bill Wyman’s wife, and Lachlan Murdoch, one of Rupert’s sons, served as witnesses. The ceremony was followed by a wedding breakfast at Scott’s in Mayfair. More than 100 guests attended.

Murdoch proposed to Hall in Los Angeles during the Golden Globes weekend after a whirlwind romance. This is Hall’s first marriage (her Bali beach wedding to Mick Jagger in 1990 was never legally binding) and Murdoch’s fourth.

The couple has been together for less than a year, and were first seen in public in October at Twickenham Stadium during the Rugby World Cup.