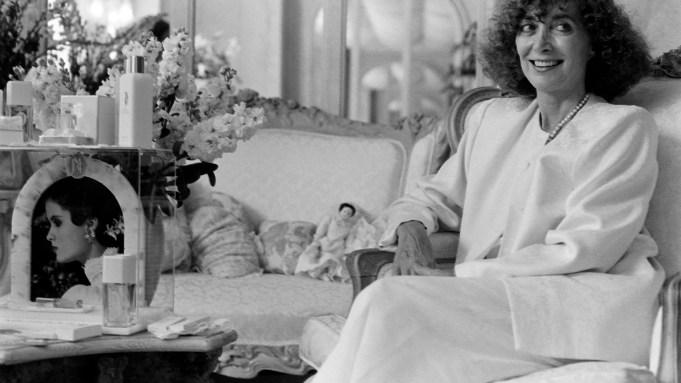 Jessica McClintock, the San Francisco-based designer who dressed legions of prom goers, has died at the age of 90.

McClintock died Feb. 16 of natural causes in the Pacific Heights home that she had purchased from filmmaker Francis Ford Coppola and had decorated romantically to reflect her brand, according to Kerry Glasser, the designer’s longtime licensing manager. A private memorial service will be held in McClintock’s hometown of Presque Isle in Maine this summer.

News of the designer’s death was supposed to be relayed last month by a freelance social media manager. That did not happen as planned, since the freelancer became busy with other projects, Glasser said.

As founder, president and chief executive officer, McClintock created a multimillion-dollar company that outfitted women and girls in romantic dresses that lived on through the decades. Born Jessica Gagnon, McClintock learned to sew from her grandmother. Poufy-sleeved, pastel and pretty dresses were purchased for sweet sixteens, quinceañeras and other once-life-in-a-lifetime occasions. That emotional connection helped to make the brand a favorite throughout the country, especially among middle America, and reinforced brand recognition. In 1997, WWD ranked Jessica McClintock as the seventh most-recognized brand.

An early proponent of women’s empowerment, McClintock expanded her offerings through the decades to create a lifestyle brand with beauty, apparel, accessories and home decor offerings. Hillary Clinton reportedly wore a Jessica McClintock dress for her 1975 nuptials.

A graduate of San Jose State University, McClintock taught eighth grade science for seven years before getting into fashion. She invested in the San Francisco label Gunne Sax in 1969. Her prairie style dresses now seem like a precursor to the sought-after designer Batsheva Hay. After McClintock joined Gunne Sax, the printed designs took on more of a romantic twist. Over time, she put her name on the company, developing a multi-brand strategy by creating new divisions.

Designer Stan Herman said, “She beat her own drum in all the years that she was in business. She had what I would call ‘sensible glamour’ in her clothes. They were for women who wanted to be pretty, but not particularly noticed. She had that touch very few designers have, especially women designers. There was a soft edge to her designing. Her designs weren’t critically challenged by East Coast design. For years, she just did her own thing and did it beautifully.”

In the beginning of her career, McClintock reminded Herman of Liz Claiborne in that she found her following and never really deviated. He also noted that McClintock’s “sweet, nice” clothes could be found in any department store at one time.

That dedicated department store following in the 1970s somewhat inhibited McClintock’s inventiveness. “The buyers didn’t want me to change,” she told WWD in 1980. “I was locked into a stereotype, and I was bored a little.”

However synonymous her name was with proms, McClintock evolved through the years, layering in evening separates, fragrances and sportswear. Referring to the latter, JMc San Francisco, which was made entirely in stretch jersey in 1997, McClintock described it as “techno-romantic.” She added, “I believe in change and this junior market is always changing because it is always open to new ideas.”

By that point, the San Francisco-based company generated $140 million in wholesale volume through Gunne Sax; a junior dress label, Scott McClintock; moderate misses dresses, and Jessica McClintock signature, bridal and girls. At its peak, the company had 40 freestanding stores. She told WWD in 2014, “My passion has been and will continue to be to provide my devoted customers with well-designed and value-driven products reflecting my love of the romantic lifestyle.”

As a sign of the label’s reach, the opening of the Jessica McClintock store on Rodeo Drive rang up more than $200,000 in sales after three weeks. The outpost was the company’s 10th. The designer also had a namesake fragrance and a men’s cologne named for her son Scott, who worked with her for many years. Actress Jane Seymour helped to raise the brand’s profile.

Having worked with McClintock in organizing the West Coast edition of the CFDA’s charitable “Seventh on Sale” in the early 1990s, Fern Mallis said her support, as well as the support of executives at Gap Inc. and other San Francisco-based companies, helped to raise millions of dollars. Mallis said, “She was the quintessential San Francisco designer who never seemed to get the respect from the fashion industry that she deserved because she had an incredible business.”

In September 1992, the company faced protests organized by what was then known as the Asian Immigrant Workers’ Advocates organization for using a practically bankrupt contractor called Lucky Sewing Co. The AIWA sought $15,000 for the seamstresses, who lost their jobs after the company filed for bankruptcy, and a two-year independent contract. McClintock claimed to have no control over the contractor’s dealings and was exempt from responsibility under California law.

In retaliation, AIWA ran an ad titled “Let Them Eat Lace” in The New York Times that featured images of McClintock’s dresses juxtaposed with images of the seamstresses at work.

McClintock responded with a full-page ad in The Times of her own stating: “We will not tolerate intimidation or a blatant shakedown any more than we will tolerate substandard working conditions at contractors who work on the dresses we manufacture,” adding that the company’s then 23-year history had been with state-licensed contractors who “agree to abide by all federal and state wage, hour, safety [regulations] and other laws.”

McClintock said at that time that her company only worked with Lucky Sewing for six months and all workers were paid in full. In November 1992, the AIWA called for a boycott of the brand. Four years later, AIWA and Jessica McClintock signed an agreement that was mediated by U.S. Labor Secretary Robert Reich. AIWA gained a garment workers education fund, money for a workers’ union and scholarships for students and workers. McClintock’s company had to print labor standards bilingually and set up toll-free hotlines that were monitored by the Department of Labor, should employees need to report any substandard conditions.

The San Francisco-based company was back in the national news for another reason in 1996, after the Federal Trade Commission claimed that its care labels weren’t specific enough to keep garments from being damaged at the dry cleaners. Despite denying the tactics of the FTC as “overbearing” and “burdensome,” McClintock agreed to pay charges of $66,000 — making the company the third apparel maker to be found in violation of the Care Labeling Rule.

In 1999, after the dress designer added a full-blown collection of separates, corsets, ballgown skirts and sweater sets geared for the contemporary market, the company booked an additional $3 million in orders. “Girls out there are liking long evening skirts as a fun kind of time instead of dresses that are so serious,” McClintock told WWD at that time. “They’re also wearing some more casual items on the top.”

Designer Kay Unger spoke highly of McClintock’s “empire.” She said Monday, “I had such respect for what she did and how she reached so many young girls and made them so happy. I have so many nieces who wore her dresses for their proms and then weddings. I love what she and her son set up later in life and that she was still working in her 80s.”

When the doll company Madame Alexander marked its 80th anniversary in 2005, McClintock was among the designers whose miniature clothes were displayed on the companies’ dolls in its Harlem headquarters. McClintock tackled drastically larger projects through the Scott and Jessica McClintock Foundation, which is dedicated to the preservation of the earth’s natural environment. Started in 2018, the organization grants financial aid to global environmental causes such as The Elephant Sanctuary and the Natural Resources Council of Maine.

Always anticipating the next, McClintock sometimes drew the line at sameness. Even the red carpet attire at the 2005 Oscars did not measure up in the designer’s view. “Something had been diminished about it. I saw beautiful women…timeless pieces, but how many times can I see a timeless piece?” she asked at the time.

McClintock stepped away from the company about five years ago. With 12 licenses, including several that have worked with McClintock for 15-plus years, Jessica McClintock Inc. will continue to operate, said Glasser, who runs Concept Marketing Group. McClintock valued being “truly emotionally connected” with her customer base and was intent on building their self-esteem, he said. “We still get notes from customers. We got one the other day that had nothing to do with her death. It read, ‘I will forever be indebted to Jessica for how she made me feel about myself at my wedding, and my daughter at her proms.’ That really is the essence of what made Jessica a standout. She related to her customers on a different level. That emotional connection is important, even more so today, when people are trying to feel good about themselves.”

McClintock’s first husband, Al Staples, died in an automobile accident. Her marriage to her second husband Frank McClintock ended in divorce. In addition to her son Scott, the designer is survived by her sister Mary Santoro.