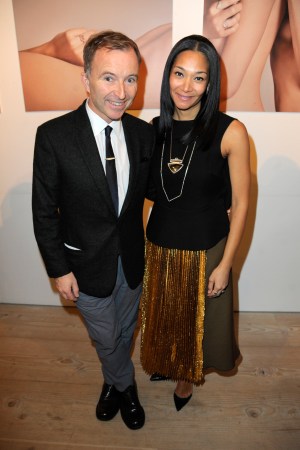 “This is our first time having Thanksgiving outside of the United States and our first time celebrating as a family. We just had a daughter who turned one last week,” said Péan, who cohosted the dinner with Wallpaper editor in chief Tony Chambers.

Guests included fellow fine jeweler Noor Fares and the sculptor Kate MccGwire, who has recently collaborated with Ann Demeulemeester and is now working on a sculpture for the Hermès store windows in Ginza.

In a bright, all-white space in Victoria, guests were treated to an all-American menu of macaroni and cheese and stuffed turkey.

Walls were covered with photographs of the pieces from the new Minéraux series. The images were shot by Collier Schorr against models’ nude bodies. “The way Collier Schorr is able to work with the human form is so raw and organic,” she said.

The series is an amalgamation of Péan’s most treasured pieces that best demonstrate her multiple sources of inspiration, including her recent travels to the Arctic Circle, Japan and Peru, the arts, and “the tension that one finds when looking at modern versus ancient architecture,” she said.

The designer also announced that she would be funding the building of a clean water well in Mali, Africa, on which every attendee’s name will be inscribed.

Philanthropy will continue to be on the designer’s agenda in the new year, as she plans to launch a capsule collection she created to support Dia Art Foundation, for which 100 percent of the proceeds will go towards the organization’s projects.

She also talked a about the reason she decided to leave her career in finance and start designing jewelry nine years ago following her sister’s death in a car accident.

“I told myself I needed to do something that I truly love, and that really makes a difference” so I started a foundation with my family, in my sister’s memory, that gives scholarships to students in Haiti and I also began making jewelry. I just found it really therapeutic to work with my hands and use design as an escape.”