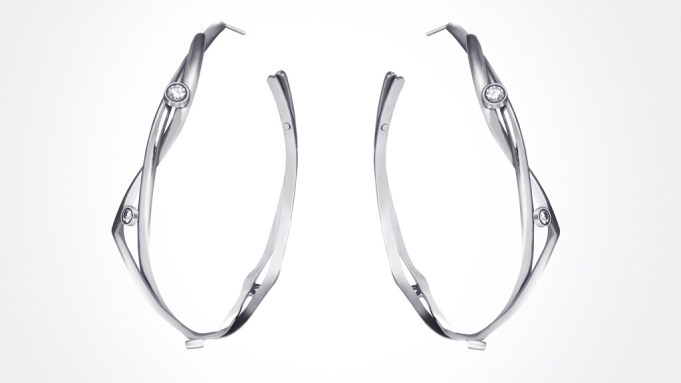 “Making earrings for the red carpet is a perfect way to demonstrate that when size matters, conventional precious metals struggle with a weight problem,” said Stephen Webster, the vault’s curator.

The twigs of a rose bush growing outside of Husam El Odeh’s studio inspired his hoop style. “I wanted to play on Palladium’s cold color, so I added diamonds — like frozen dew,” he said.

“They’re very ‘Great Gatsby,’ which is perfect timing,” Thomas Donocik said of his Art Deco chandelier earrings incorporating the vibrant green stone alphinite. Their length is meant to elongate the neck and their fluid nature means that they catch the light at every turn.

Hannah Martin’s sickle-shaped earrings were inspired by Robert Mapplethorpe, and she took pains to ensure they had no obvious front or back.  But that wasn’t the only kind of pain that she and her team experienced making them. “We cut our hands all the time because they were so sharp,” she laughed.

Webster also revealed that he is taking Rock Vault to Fortnum & Mason later this year. “They are opening a brand new jewelry salon there and it’s going to have a bar and everything. The store is 300 years old and as eccentric as you can get. They wanted to retain their British heritage so Rock Vault is the perfect fit,” he enthused.