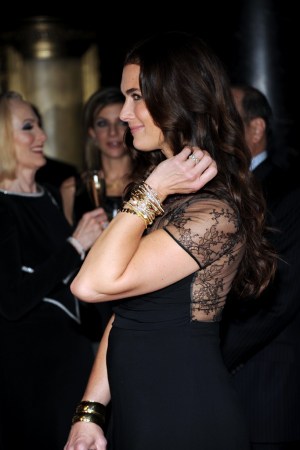 A love of jewelry and passion for the industry was the theme of the rather rapidly moving night.

“Jewelry makes a lot of people very, very happy, so here’s to that,” she said.

Next up was jeweler Ippolita, who was introduced by longtime friend Brooke Shields. The actress drew chuckles when she did her best impression of the Italian-born designer’s passionate way of speaking.

“She went to the Instituto D’Arte” Shields said emphasizing the pronunciation. “She’s really an artist at her core…She empowers women.”

Ippolita bounded to the stage, thanking her team, adding: “I feel like I’m very dedicated to the idea that art matters,” the designer said.

Just after dinner had been cleared, roughly an hour after guests took their seats, Susan Jacques, president and ceo of Borsheims fine jewelry and gifts presented Matt Runci with a lifetime achievement award.

Jacques’ detailed account of Runci’s impressive resume, which included playing a major role in the Kimberly Process and a stint as a former college professor, incited cheers and a standing ovation when Runci strode onstage to accept his award.

In a brief, yet  inspiring speech, the exec offered the audience three major tenants that have guided his career.

“One, integrity means everything. Without it the value of your achievements can best be fleeting, “ Runci said. Number two, believe in the value that you personally bring to the table. If you don’t how can you possibly expect others to do so. Three if something is worth doing. It’s worth doing as well as it can be done. Half an effort will likely deal you have of the result.”