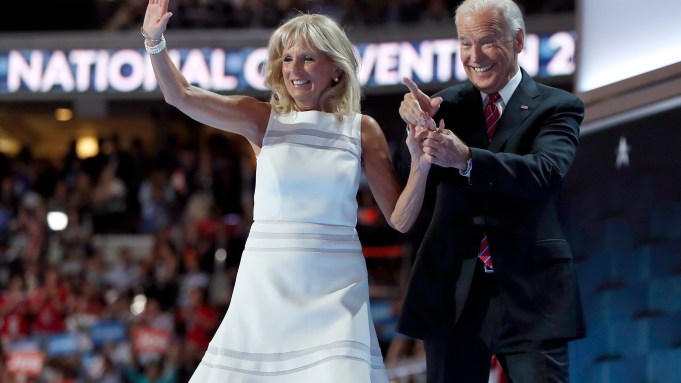 Jill Biden is stepping back into the White House following Wednesday’s inauguration as she assumes her new role as first lady. While nationwide political unrest following the Jan. 6 pro-Trump insurrection at the nation’s Capitol and President Donald Trump’s looming impeachment trial have cast a shadow on the inauguration and questioned fashion’s role in the historic moment, many spectators are still keen to see what Biden will choose to wear for the pivotal day.

Even though much attention has been placed on Vice President-elect Kamala Harris’ wardrobe since she joined President-elect Joe Biden’s ticket last August, Jill Biden will undoubtedly join the long-standing tradition of media outlets and fashion spectators paying attention to her every sartorial choice.

Biden’s style has remained largely consistent since her time as second lady throughout her husband’s presidential campaign. Her style can be described as conservative and feminine, as she often opts for modest A-line dresses in an array of bold colors and traditional patterns paired with matching cardigans.

Perhaps one similarity Biden’s style has to her controversial predecessor, former First Lady Melania Trump, is she doesn’t shy away from making a statement through her fashion choices. During her husband’s presidential campaign, Biden regularly wore pieces that relayed messages.

For instance, she paired a bright purple dress with Stuart Weitzman’s limited-edition “Vote” boots when she voted early in the presidential election alongside her husband in Wilmington, Del. Biden also made a statement to get out the vote during a campaign rally in Florida in October, when she paired her floral-print dress with a purple face mask that read “Vote.”

Biden’s wearing of face masks was a statement in itself, as Trump and the first lady rarely did so during the campaign or at the presidential debates despite a mandate from the Commission on Presidential Debates on mask-wearing for audience members.

During her time as second lady, Biden regularly re-wore designer dresses for public engagements. One of her most worn pieces is her sustainably made green fringe Gabriela Hearst dress she wore most recently at the first presidential debate in September.

“What a surprise and honor to see that at last night’s debate Dr. Jill Biden repurposed a GH dress she wore three years ago,” Hearst wrote in an Instagram post. “Climate change is the biggest threat we are facing as a species. Sadly what we lost we can’t recover (60 percent of wildlife in 50 years) but we can preserve and restore. We need the policy to do it and there is only one side right now unfortunately that is willing to admit what is real against all scientific proof.”

As is usual leading up to the inauguration, Biden’s team has been secretive about her fashion choices on Inauguration Day, but representatives have said both Biden and Harris are not interested in conveying a fashion message, according to a few designers and executives that spoke with WWD.

A list of fashion designers, however, are said to be in the running for designing Biden’s outfit on Inauguration Day, including Hearst, Wes Gordon at Carolina Herrera, Donald Deal, Christian Siriano, Prabal Gurung, LaQuan Smith, Oscar de la Renta and Brandon Maxwell.

In the lead up to Inauguration Day, WWD looked back to Biden’s style during her time as second lady and throughout the presidential election. Click through the above gallery to see more.