The moment has finally come for women who have dreamt of running, jumping and shooting hoops in their Jimmy Choos. 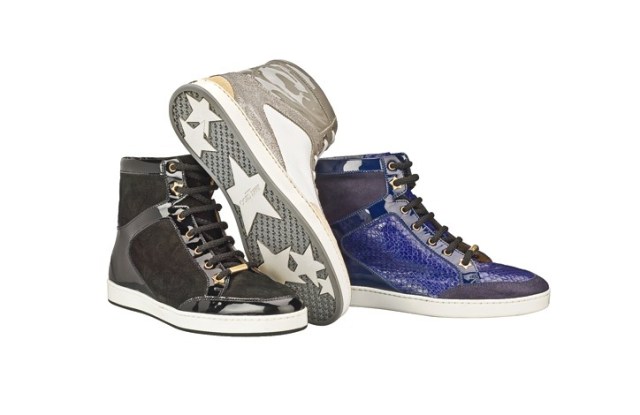 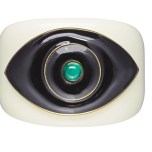 CHOO GETS SPORTY: The moment has finally come for women who have dreamt of running, jumping and shooting hoops in their Jimmy Choos. The London-based brand will bring out a capsule collection of sneakers — or trainers, as the Brits like to call them — for pre-fall. There are five high-top models and three low-tops in shades of white, black, purple and beige. Materials include patent leather and suede, and a star motif covers the slim soles. Prices range from $465 for a suede and patent leather low-top model to $595 for a suede and patent leather high-top. The shoes will be available at all Jimmy Choo stores and online from May.

This story first appeared in the February 11, 2010 issue of WWD. Subscribe Today.

WALK THIS WAY: Apparently, Naomi Campbell isn’t above a little arm twisting. The supermodel has persuaded Diane von Furstenberg and Donna Karan to hit the runway at the fashion show Campbell is pulling together to help Haitian relief efforts. Contrary to some recent buzz, Marc Jacobs will not be on the catwalk or in the audience. Campbell and Helena Christensen will be among the models in the show. Dolce & Gabbana, Christian Dior, Carolina Herrera and others have donated dresses. Nicole Miller made a duplicate style of a dress that will have debuted an hour earlier on her own runway.

TWO OF A KIND: Two childhood friends, two New York designers: Tory Burch and Kara Ross have collaborated on a capsule jewelry collection for fall, titled Kara Ross for Tory Burch. “Kara and I grew up together in Philadelphia and went to the same high school,” said Burch. “I have long been a fan of her collection.” The line, inspired by the evil eye motif, includes gold-plated and metal cuffs, rings, chokers and pendants that feature colored enamel and gemstones. It bows this fall at Tory Burch boutiques and online at kararossny.com and toryburch.com, retailing from $195 to $695. “Tory and I had talked about collaborating over the years,” said Ross. “I designed a selection of evil eye pieces in my fine jewelry collection several season ago and we both kept going back to this idea, but updating it with a bolder, more modern look.”

TO THE WEB: To show her fall collection, Reem Acra is eschewing a runway show this season in favor of an online-only film. Acra is joining forces with French filmmaker Cyril Guyot and stylist Laura Ferrara to create a video that displays her fall wares while offering viewers a deeper glimpse into the brand. “I have so many clients overseas. I have so many people who want to be part of [the show],” Acra explained of her decision. The film will be shot on Tuesday and aired on Acra’s Web site around noon on Feb. 18 and will run about four minutes. Acra was mum on details of the shoot, including the location, though she said there will be a specific mood to the film that isn’t solely gown-oriented. “It will be a wider expansion of showing dress after dress — we’re experimenting, trying something out,” she said. “For me its not a risk, it’s a great way of looking at things and the future.”

VERY CONTEMPORARY: In addition to their signature collection, Mark Badgley and James Mischka will be sending 40 looks from their Mark & James contemporary sportswear line down the catwalk. The 1,000 guests need not worry when the lights go down midstream. After a quick but said-to-be significant set change, the secondary label will be spotlighted and will even cap off the finale.

MAIER HITS PALM BEACH: Bottega Veneta creative director Tomas Maier spent some time in Palm Beach last week, lunching with his ladies. Kelly Klein, Hilary Geary Ross and Jackie Sackler were among the New Yorkers who migrated to Florida’s warmer climes for an afternoon meal with Maier at Club Colette and a preview of his spring collection. A portion of sales from any purchases made that day and throughout this week are being donated to St. Jude’s Childrens Research Hospital.

GOING FOR COVER: Jeremy Scott, who is returning to New York Fashion Week for the first time in several seasons on Feb.17, is expected to unveil a brand new project at the show. Scott is the latest designer to collaborate with Proper Attire for a line of condoms, putting his creative touches on the packaging using prints from his spring collection. “As fashion designers, so much of what we make is seen as frivolous, and being asked to design prints for the Proper Attire packaging to help promote safer sex practices reminds me of how fashion can still make a real statement,” Scott said. Planned Parenthood affiliates will receive the special designs.