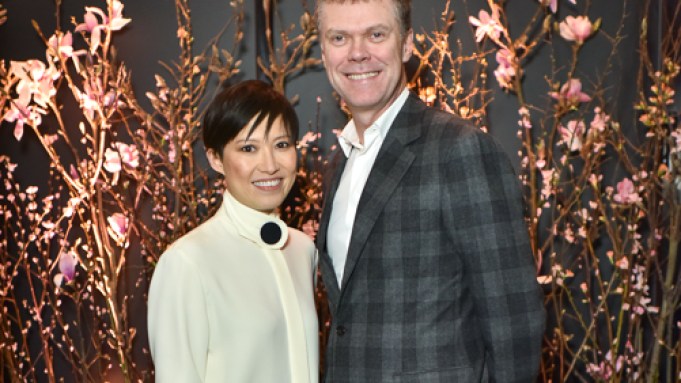 CHOO AT CHOW: “Don’t worry, he’s only making noodles,” said the head waiter as the noodle chef repeatedly slammed a stretchy lump of dough onto a wooden board, sending shock waves through the private room at Mr. Chow in London. The lump was later transformed into an elegant lineup of mile-long noodles ready for their chili dressing.

The famous Mr. Chow noodle performance took place during a dinner to mark the 20th anniversary of Jimmy Choo earlier this week, hosted by the brand’s creative director Sandra Choi and chief executive officer Pierre Denis. Choi, a niece of the brand’s namesake founder who’s been with the company since its beginnings, took pains to make sure everything in the room reflected the upbeat mood of the brand right now.

Dinner was a feast to mark the Year of the Monkey, with piles of prawns, dumplings, lobster, chicken and toffee and apple fritters for dessert while the fortune cookies took their cue from — what else? — footwear. The message inside was a quote from Oprah Winfrey: “I still have my feet on the ground, I just wear better shoes.”