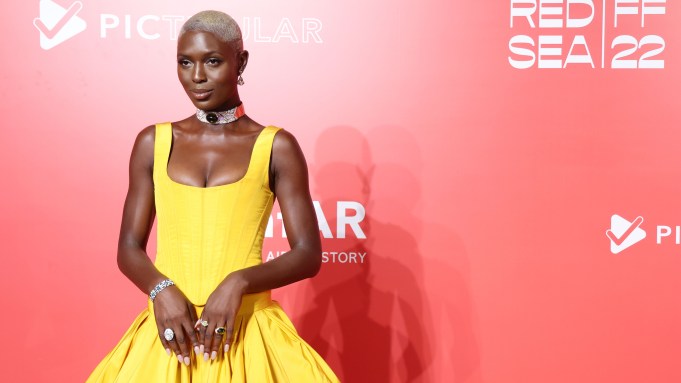 The actress attended the amfAR charity event in Venice, Italy, on Wednesday night in her latest eye-catching look. Turner-Smith walked the red carpet wearing a multicolored dress with a corset-style top and maxiskirt from Christopher John Rogers’ resort 2023 collection. She paired the look with a choker, bracelet and rings from Bulgari. Turner-Smith’s look was styled by styling duo Wayman Bannerman and Micah McDonald.

The amfAR gala was held to honor Turkish Italian director and screenwriter Ferzan Ozpetek, who received the Award of Courage in recognition of how his films focus on the exploration of sexuality and giving a voice to the LGBTQ community. The evening included a musical performance by Ellie Goulding and a live auction.

This is Turner-Smith’s latest standout fashion moment this month, as the actress has attended multiple premieres during the Venice Film Festival wearing high-fashion looks from Christopher John Rogers, Balmain, Gucci and others.

For the premiere of “Bardo,” Turner-Smith also looked to Christopher John Rogers for the red carpet, wearing a paint splatter-designed dress from the designer’s pre-fall 2023 collection. She’s also worn looks like a denim Balmain gown at the premiere of “Bones & All” and a black, crystal-embellished custom Gucci dress on opening night for the premiere of “White Noise.”