It's stylish. It's a Class 1 medical device. And it's available for orders, starting Friday.

As the world reels from revelations that no place is safe from the coronavirus — whether that’s Amazon, Congress or the White House itself — a new product ventures into the market pledging to help consumers worried about infection.

On Friday, award-winning product designer Joe Doucet revealed that he’s turned his fashionable face shield concept into reality. Doucet made a splash this spring with his own take on a healthy safety product that, he hopes, people will actually want to wear. Now the product is in production and ready to take orders, with availability on Nov. 16.

He explained his concept to WWD in May: “If I could adopt that common behavior [of wearing glasses] and create a face shield that would be very desirable to wear, something that has a factor about it that you want to put on, perhaps we can achieve more mass adoption of this necessity.”

In keeping with the vision, the $39 Vue Shield sits at the nose bridge and both ears, like eyeglasses and comes in three styles: a sunglasses aesthetic for men and women, plus a clear unisex version. “Additionally we have incorporated anti-fog, full UVA/UVB and SPF-50 coatings,” Doucet told WWD on Friday. “The clear version comes with a blue light-blocking coating as well.”

For now, he’s selling directly to consumers online at Vue Shield’s web site, with shipments worldwide. But the designer anticipates product availability at other retailers before long. He’s already tackled the difficulty of spinning up full-scale production during a global pandemic — which has been “the largest challenge,” he said — and now manufacturing partners can handle up to one million units a month for wholesale orders.

The shield comes in three styles: sunglasses for women and men, plus a unisex clear version.  Courtesy image

So far, most of the public discourse around personal protection has revolved around face masks, though health experts regularly weigh in on whether they offer better protection than shields. The opinion seems to vary, depending on whom one asks.

The Centers for Disease Control and Prevention recommends wearing “cloth face coverings in public settings where other social distancing measures are difficult to maintain.” Other organizations such as University of Iowa Health Care and Ohio Department of Health have also indicated that face masks are preferred, particularly when they’re adequately sealed to the face.

According to a question-and-answer column offered by MIT Medical this summer, masks can capture large respiratory droplets before they hit the air, which can help protect surrounding people. By contrast, a face shield, by virtue of its more open design, could allow the droplets to escape.

Notably, though, a team from MIT produces disposable face shields for use in hospitals, where medical personnel often use both masks and shields.

Face shields appear to have other proponents as well. In The Journal of the American Medical Association, University of Iowa Carver College of Medicine professors noted that “face shields appear to significantly reduce the amount of inhalation exposure to influenza virus, another droplet-spread respiratory virus.” In a study with a simulated health-care worker, face shields seemed to reduce immediate viral exposure by 96 percent.

And Johns Hopkins Center for Health Security’s pandemic expert Amesh Adalja, M.D., has publicly acknowledged the possibility that a face shield is better than a homemade face mask, “and maybe [it’s] even better than other types of masks as well.” He pointed out that, in addition to blocking the spread of viruses, a shield also protects the eyes. “It provides more protection to the mucus membranes of your face where you might be getting infected,” he said. 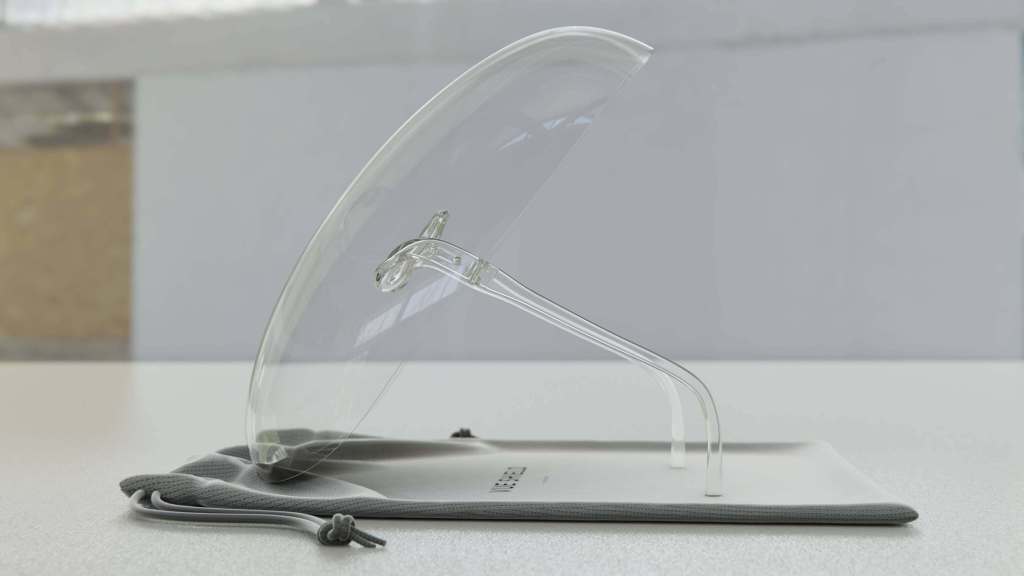 The Vue Shield wears like a pair of glasses, but covers the whole face.  Courtesy photo

Of course, Doucet’s opinion on the matter is obvious: He believes shields are more effective at preventing infection, and they also keep people from touching their faces — which can be a major vector, he said, as “we do this over 20 times an hour.”

For his product, in particular, “we have designed the shield to mound around one’s face, unlike other face shields which are quite open on the sides and bottom,” he added. The unit sits taller and curves above the head and under the chin, and covers the sides of the face.

Another key aspect that could help ease nervousness: Vue Shield is qualified as a Class 1 medical device. And if that’s not enough, at-risk people can double up by wearing a mask inside the shield, as the design allows for that.