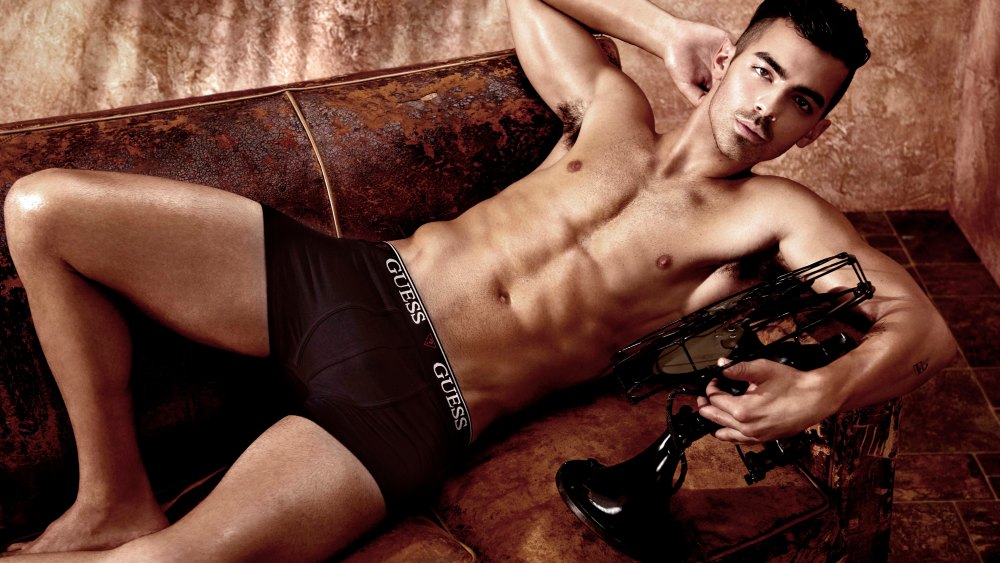 Looks like someone’s been hitting the gym. Guess has tapped musician, actor and social media star Joe Jonas as the face of its inaugural men’s underwear line, “Hero.” The campaign, shot by Yu Tsai and styled by Avo Yermagyan, will make its debut in March and features Jonas solo and alongside Guess girl Charlotte McKinney, who wears Guess lingerie, in an array of boxers and briefs designed with a wide elastic waistband stamped with the Guess logo, and a mixture of T-shirts and tank tops featuring the iconic triangle motif.

“It’s the first time in history that Guess has commissioned a male star to be in an underwear advertising campaign. He’s a great talent who embodies all the characteristics of Guess’ DNA — sexy, young and adventurous,” said Paul Marciano, chief creative officer and executive chairman of the board.

The Hero collection’s main focus is comfort and fit, while also flattering the male physique. The itchy inner label is replaced by a flat print and the range includes a handful of core styles that will carry over from season to season. Retail prices range from $18 to $29.

The launch reflects the company’s strategy to strengthen its underwear and beachwear categories, aiming for global expansion with a focus on the American, Northern European and Asian markets. “The underwear is already very strong in Europe so it will roll out there first,” said Marciano.

Jonas has come a long way since he started in The Jonas Brothers in 2005 with his brothers Nick and Kevin. He’s appeared in multiple Disney Channel movies and television shows, dated Taylor Swift and Gigi Hadid, and formed a new band, DNCE, whose first single “Cake by the Ocean” went platinum. He’s also amassed eight million followers on Twitter, five million on Facebook and 4.5 million on Instagram. And his new squeeze is “Game of Thrones” star Sophie Turner.