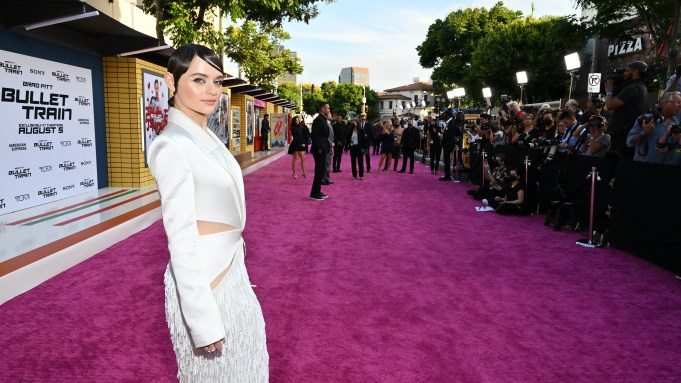 Joey King had another standout fashion moment during the “Bullet Train” press tour.

King has regularly made an impression on the red carpet during the “Bullet Train” press tour. She kicked off the press tour in Paris where she attended the film’s screening wearing a Thom Browne black structured strapless dress over a sheer white dress shirt. In Berlin, King debuted a blunt pink bob hairstyle, which she paired with an edgy all black Balenciaga jumpsuit.

In London, King looked to a Nensi Dojaka black cutout minidress from the designer’s fall 2022 ready-to-wear collection for the film’s photo call, and then later changed into an edgy Marc Jacobs white cutout turtleneck paired with an orange and black checkered maxiskirt and black leather opera gloves from the designer’s fall 2022 rtw collection for the London film premiere.

For more press promotion in Los Angeles, King went with a girly look, wearing a bright pink minidress from Versace.