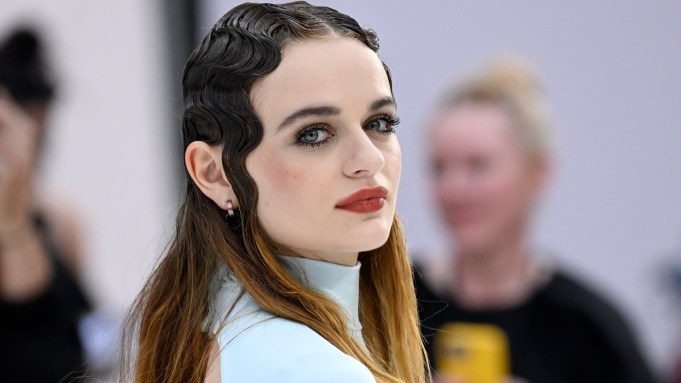 Joey King is continuing her streak of edgy outfits with her latest red carpet appearance.

The actress attended the premiere of her film “Bullet Train” on Wednesday in London wearing a look from Marc Jacobs’ fall 2022 ready-to-wear collection. King’s look consisted of a white cutout turtleneck top with a black-and-orange checkered maxi skirt. She accessorized with black leather opera gloves.

This is King’s latest standout fashion moment during the “Bullet Train” press tour. On Tuesday, the actress made an impression at the film’s Berlin premiere where she sported a new pink bob hairstyle paired with an all-black Balenciaga jumpsuit.

Also in Berlin, King appeared at the film’s photocall wearing a black minidress from Nensi Dojaka’s fall 2022 ready-to-wear collection, and at another engagement wearing a sleeveless black Paco Rabanne dress.

In Paris, King opted for a structured black dress worn over a white shirtdress from Thom Browne.

While King has consistently made an impression for her “Bullet Train” press tour looks, her costar Pitt has equally left his mark. Pitt eschewed his traditional, classic tuxedo style for the press tour in favor of more casual pieces. His most standout look came at Tuesday’s Berlin film premiere where Pitt wore a matching brown linen jacket and knee-length skirt.

Photos: See Stars on the Red Carpet at the ‘Bullet Train’ London Premiere