The British designer collaborated with the edgy East London retailer Hostem, mounting an artistic installation at the store 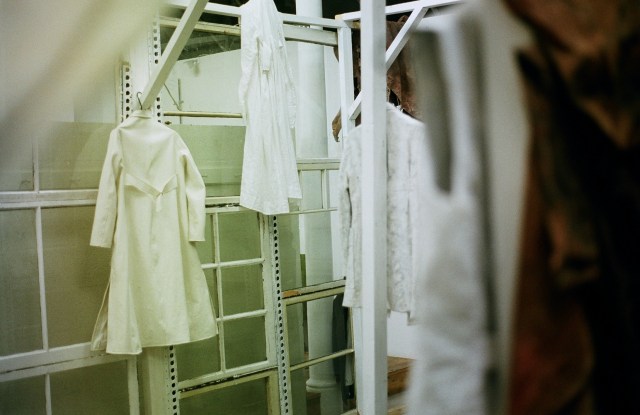 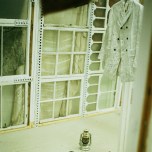 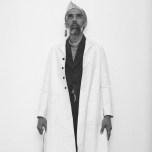 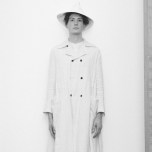 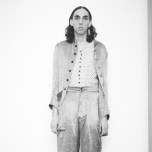 Skelton, who graduated from Central Saint Martin’s with an M.A. in fashion men’s wear earlier this year, was chosen by Giles Deacon for the Sarabande scholarship, granted by the Lee Alexander McQueen Foundation. He has interned for various London-based designers such as New Power studio, Omar Kashoura and Patrik Ervell in New York and has worked for Cos and E.Tautz.

With a focus on sustainability, the Yorkshire-born designer said his collections are motivated by cultural or musical influences. For his fall collection, he looked to Cottonopolis, the 19th- and 20th-century cotton towns of Lancashire, England and their connection with India.

Using upcycled cloths such as linens, hemps, Khadi muslins and cottons that are hand spun or hand-woven, he has created a line of sustainable separates. They include high-waisted roomy trousers and a tailored coat in an A-line silhouette. He worked with 19th-century French fabrics, including handwoven grain sacks.

Skelton said when he designs, his main focus is on the process and materials, and he experimented with dyeing for spring. The designer took fabrics and buried them in the ground, letting them disintegrate, as in a cardi-cotton coat dyed naturally with leaves from parks in London.

While the 27-year old studied men’s wear design, he said he created a unisex collection for men and women. “I wouldn’t ever want one particular person to wear my clothes,” said Skelton. “This collection is about the benefits of multiculturalism and the mixing of cultures and how two cultures contribute so much more when they entwine, but how they also retain their own identity at the same time.”

Skelton teamed once again with British milliner Stephen Jones (who collaborated with the designer for his graduate collection) on a series of hats, including a Gandhi cap created with a newspaper and a white hat made with bamboo leaves on a handwoven linen base.

Skelton’s collection was shown on hangers or loosely strewn across the floor of the installation at Hostem. It featured a series of all-white window panes made of recycled materials. The windows — sourced by Coresash, a London-based sash window company — were mounted together and hung on walls.

“I wanted to create a world that was very eclectic,” said Skelton. “I wanted to hang everything from different places because it a very immersive space, and you kind of have to take the time to look around and see all the things, rather than it all just being placed in front of you on like a railing.”

This is Skelton’s first collection since his graduate collection, which he refers to as Collection II. Collection I can be purchased at Hostem. The installation will run until Oct. 16.