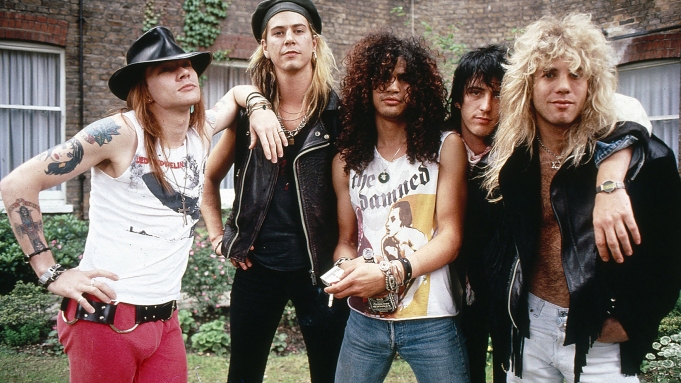 John Varvatos has a well-documented love of American rock ‘n’ roll bands, so it’s not surprising that he teamed with music merchandise specialist Bravado to create a Guns N’ Rose capsule collection to mark the band’s Not in This Lifetime reunion tour after a 25-year absence. The 15-piece John Varvatos x GNR collection consists of baseball hats starting at $25 retail, T-shirts starting at $40, bomber jackets for $425 and hand-painted leather jackets for $1,195. All pieces will be sold in a special pop-up shop within Varvatos’ West Hollywood boutique at 8800 Melrose Avenue.

The pop-up opens today with a kick-off party from 3 to 7 p.m. PT, during which a live DJ will greet the first 50 people in the door with a limited-edition Guns N’ Roses T-shirt. It’s good timing, considering the first of two Dodger Stadium shows starts tonight. Those without tickets might get lucky, as all guests can enter to win one of two packages being drawn at the event: each includes two concert tickets and two “Welcome to the Jungle” pit experiences, valued at $2,000.

While Axl Rose, Slash, Duff McKagan and company have been touring since spring, this week’s shows mark their long-awaited stadium return to their hometown of Los Angeles. While Rose has been sporting a flat-rimmed fedora instead of his signature bandana lately, a whole new generation of concertgoers have adopted the printed kerchief as the summer accessory of choice, this time tied around the neck instead of the forehead.

The Not in This Lifetime tour continues in California and South America through November, then picks up in January in Japan, followed by Australia. The show wraps up Feb. 21 at Domain Stadium in Perth, Australia. But the band says never say never to another tour in this lifetime.