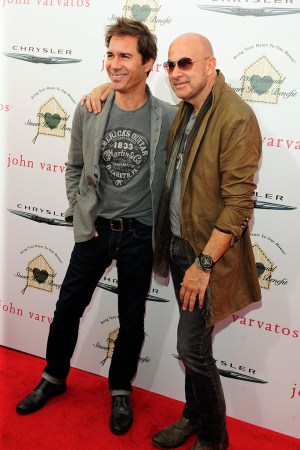 John Varvatos literally stopped traffic for the 12th Annual Stuart House Benefit last Sunday, an event which started as a small fund-raiser in the parking lot of his Melrose Avenue store and has since taken over the entire block.

“Eighteen-hundred people, it’s incredible,” Varvatos said of the ballooning event. “The city said, ‘You can’t do this, you’re stopping traffic,’ and they supported us to shut down Melrose which they don’t do for anyone else.”

“For a child, it takes an incredible amount of courage to simply come forward and seek help and articulate events of trauma that they’ve experienced,” Pine said. “The Stuart House makes that experience as humane as possible in a system that often dehumanizes the exact person that they’re trying to heal,” said Pine of the center, which treats child victims of sexual abuse.

The “2 Broke Girls” actress Behrs also came out for the cause, saying, “Kat [Dennings] and I were literally like, ‘We’ll sell everything we own.’ I told them I would climb a mountain.”

Although the offer was generous, it wasn’t necessary due to an auction that raised $957,000 dollars from various items such as limited-edition tote bags from the event’s presenter Chrysler, a John Varvatos shopping spree, and a trip to Maui.

The event’s other big lure is the headliner performance, this year by seven-time Grammy-winner Ziggy Marley. Although for some of the younger guests, reggae wasn’t the preferred choice of entertainment. Kids in the Hasbro Studios tent got colorful hair extensions and airbrushed tattoos, played air hockey and witnessed tricks by magician Joel Ward.

Nevertheless, the oldest of Bob Marley’s offspring drew a gigantic crowd for an hour-long concert sprinkled with favorites like “Is This Love,” “Jammin” and “Moving Forward.”