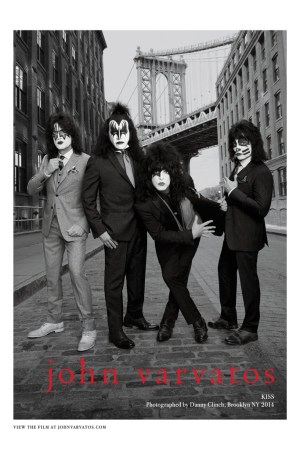 John Varvatos is giving new meaning to the expression: dressed to kill.

The designer has turned to the legendary rock band Kiss — who will be inducted into the Rock ’n’ Roll Hall of Fame in April — to be the face of his spring advertising campaign. The ads, which were shot in black-and-white by rock photographer Danny Clinch in the DUMBO area of Brooklyn, were inspired by the group’s Dressed to Kill album. The performers were photographed in full makeup wearing Varvatos suits.

Although it’s no surprise that Varvatos would use rock stars in his advertising — for 19 seasons he has turned to entertainers ranging from Jimmy Page and The Roots to Green Day, Iggy Pop, Cheap Trick and Alice Cooper. But Varvatos took it one step further this time, bringing the band onstage for a surprise performance at an after-party following his fall fashion show in Milan on Saturday to reveal the collaboration.

Stephen Niedzwiecki, founder and chief creative officer of Yard, Varvatos’ agency, said: “Throughout the years, John and I have always tried to work with musicians who are iconic, but not necessarily on the tip of your tongue or someone you would expect in a men’s fashion campaign. Kiss was known for a specific style as a band. Not only were they innovative and break through with their music at the time, they were also style icons. Kiss’ sense of style not only inspired future musicians, but John and creative people of all types. And its been important that every person we’ve shot over the years represents both a breakthrough figure in the music industry and, style-wise, has created a point of view for themselves. Kiss’ look wasn’t something you could wear to a Bar Mitzvah, but if you asked people what the band looked like, they would certainly be able to tell you. They created this spectacle in music and had an overpowering sound and sense of showmanship, but at the same time were really well-educated, smart men with successes outside of music.”

A documentary-style short film that was conceived by Yard and directed by Clinch is also premiering on JohnVarvatos.com Saturday. The three-minute film highlights another surprise Kiss concert at the John Varvatos Bowery Store, once the home of the famed CBGB’s nightclub, last fall.