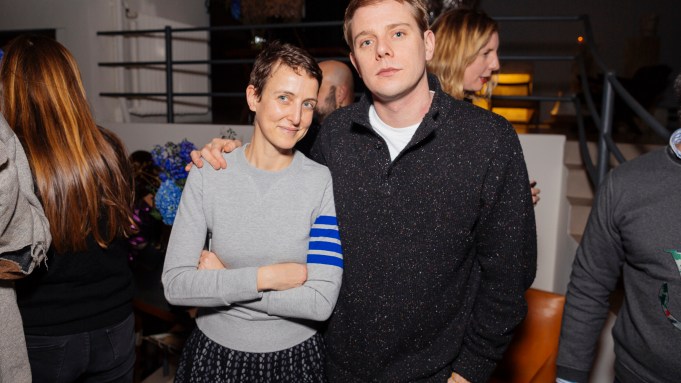 BIG DESIGNS: Jonathan Anderson likes to make his shows cultural experiences, and to celebrate the launch of his second collaboration with Converse, he stayed consistent, cohosting an intimate Saturday-night gathering at the Hotel Martel. Designed by Robert Mallet-Stevens, the gallery apartment belongs to antique dealer Éric Touchaleaume.

“I wanted something that felt like home as I don’t have a home here, something domesticated somehow, with these Roman and Egyptian artifacts, a contradiction to what the collection is about,” said Anderson, adding of the footwear: “I love Converse, I’ve worn them for so long, and it’s quite a vanity thing to be able to make your own. Plus they make you feel really young.”

Visiting the rooms, Michael Amzalag, one half of Paris design and art direction agency M/M Paris, was having a flashback. “It’s funny, it reminds me of being in art school. We used to have to come and look at the building as part of our studies so it’s great to be inside it,” he said.

In terms of projects, the studio has designed the set for the Alexander McQueen show on Monday, he said, and for the first time was tapped to design the set for the Miu Miu show, which will take place the next day. “We designed an alphabet for them,” he said, whipping out his phone to show some images. “We already have teaser posters up around Paris.” The design duo is also working on a new book based on the archives of Stanley Kubrick — this time based on “Dr. Strangelove or: How I Learned to Stop Worrying and Love the Bomb” — as well as a book for the 150th anniversary of Château Lafite. “I discovered the world of wine critics, it’s amazing the terminology they use. It’s super technical and then all of a sudden goes completely personal and sensitive. So much craft in the writing,” said Amzalag, heading off to get a glass.

“I think I should consult on the Chanel men’s collection because I would wear it, I want it. The other thing I love about it is that Chanel originally was men’s clothes adapted to women, and now we’re living this era where it’s all about a gender spectrum. It makes total sense — just add the pearls,” Spooner said.

Sarah Andelman looked on approvingly, saying: “When Chanel did the pop-up at Colette I wanted them to do some men’s wear.”

Spooner said he also wants to set up a residency in Paris, which, he said, inspired the whole idea of cabaret and nightclub performances in Vegas. “I want to be the 21st-century Josephine Baker.”