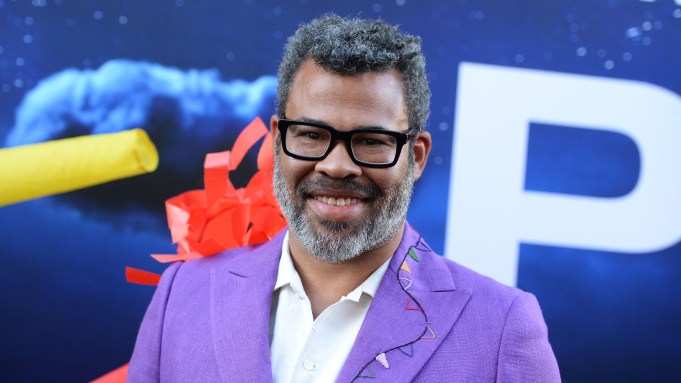 Jordan Peele is celebrating his latest film with a sartorial nod to the project.

The Oscar-winning filmmaker attended the Los Angeles premiere of his latest horror film, “Nope,” Monday night, which he directed. For the red carpet, Peele wore a custom purple Bode suit that was embellished with stitching that depicted a cloud and a colorful kite. The design element was a nod to the film, referencing the ominous cloud that’s featured in the movie’s trailer and poster.

Peele posed on the red carpet alongside his wife Chelsea Peretti, as well as the film’s stars Keke Palmer, Steven Yeun, Daniel Kaluuya and Brandon Perea. The film’s premiere also drew in several other celebrities, including Lupita Nyong’o, Kelly Rowland, John Boyega, Michael B. Jordan and others.

This is the latest horror film to come from Peele, following 2019’s “Us” starring Nyong’o, Winston Duke and Elisabeth Moss. Peele’s directorial debut came in 2017 with the critically acclaimed film “Get Out.” The film received four Oscar nominations, with Peele picking up an award for Best Original Screenplay.

Peele spoke about what his next project will be on the red carpet with Deadline, stating: “When I want you to know, you will know. I guarantee you. I will stay within this realm that I love, which is I think the only way that I know how to view the world and how to tell stories at this point. A little bit of horror, a little bit of comedy. I’m always going to try and give you a big show.”