The label unveiled today its women’s Flight Utility Apparel collection, which also marks as the brand’s first women’s apparel line. Jordan had launched apparel for women previously, but this collection is the first full range of pieces made specifically for them.

The capsule is comprised of a flight suit, fleece and utility pants, reversible bomber jacket with a faux fur hood, T-shirts, fleece hoodies, crop top, leggings and a body suit, ranging from $50 to $180. The collection launches on Feb. 1 at select stores in North America and Greater China such as Dover Street Market in New York and Los Angeles; Kith; A Ma Maniere; Concepts; H.Lorenzo; Ssense; Soulgoods, and Her.

“Our passionate female audience is asking us for more, and this capsule collection celebrates a higher standard, a competitive spirit and fearless mind-set for anyone who has the confidence to fly higher and break boundaries,” said Andrea Perez, general manager of Jordan Women’s.

Jordan has been enhancing its women’s offering in recent years, albeit in footwear, partnering with Aleali May on Air Jordan I, VI and X sneakers and Vogue, and in 2019 with Melody Ehsani for the brand’s Fearless Ones sneaker collaboration capsule and Olivia Kim on the Air Jordan IV in calf hair inspired by the “Black Cat” version of the silhouette.

Perez said, “Jordan Women’s grew triple digits last fiscal year and there is strong excitement from our consumers and key accounts for us to keep reaching new audiences through our women’s footwear and apparel.” The brand reported its first $1 billion quarter in December, which contributed to Nike’s profitable quarter that passed $10 billion in sales. 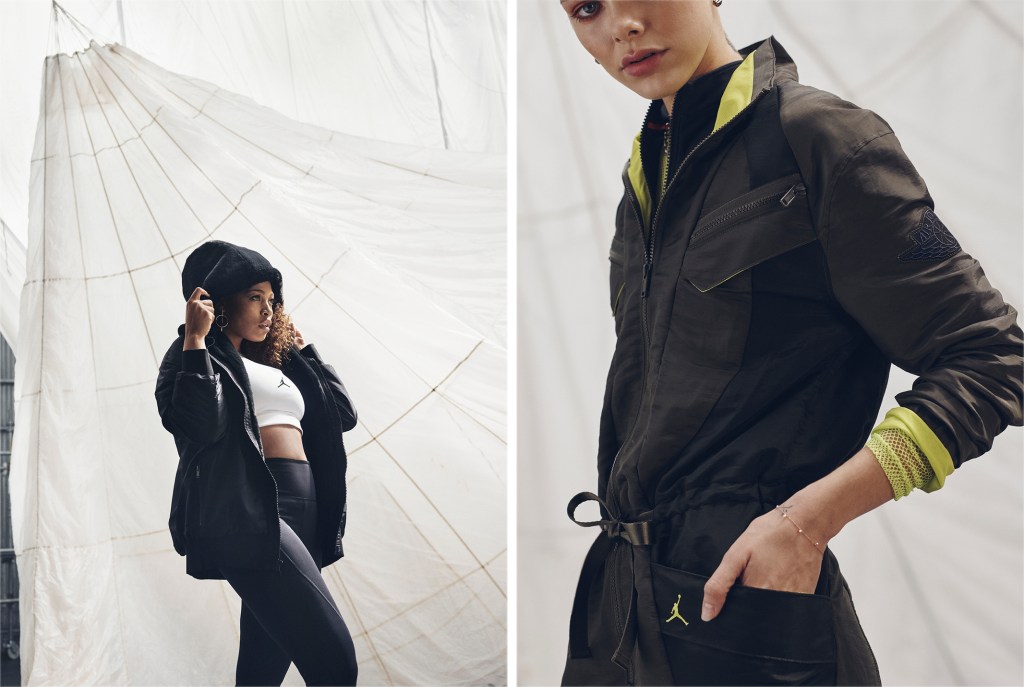 Jordan is also relaunching its first women’s Air Jordan sneaker, the Women’s Air Jordan OG, that first debuted in 1998. The sneaker, returning on Jan. 16, shares details with the Air Jordan XIII silhouette such as the dimpled leather upper, the tongue and toe.

In addition, the brand is launching this year its “New Beginnings” pack with the Air Jordan I Hi sneaker and the Nike Air Ship, the sneaker that was banned by the NBA. The brand did not reveal a launch date although rumors say it could be as early as February.