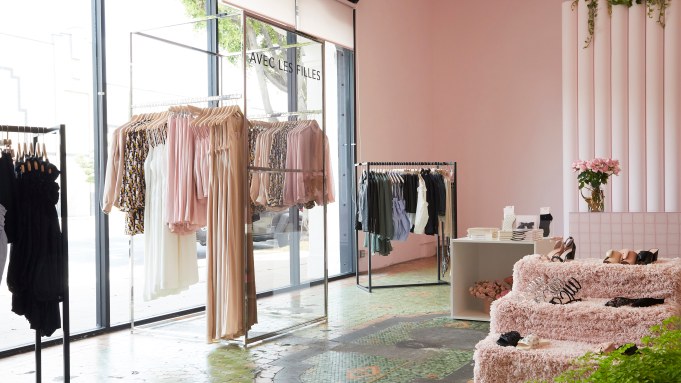 Joyce Azria is finally bringing her fashion vision for Millennial women — her newly launched contemporary line Avec Les Filles — home. The brand, which launched in 155 Macy’s Inc. doors nationwide in March, will open its first retail pop-up at its new Los Angeles headquarters on La Brea Avenue on May 19.

“It’s a summer pop-up, where all of our L.A. followers and influencers and celebrities can come,” said Azria, the former creative director of her father Max’s company BCBGeneration. “With the Macy’s at Beverly Center still under renovation, we wanted a place close to home. We just moved into our new offices last month, in a former tile factory and auto body shop, so it’s the ultimate revival game.”

Since then, Azria has set about transforming the space into a pink paradise while keeping all the vintage architectural details that define many of the structures on the trendy retail boulevard.

“It’s an interactive hub to showcase our clothes, where we can give our girl everything she’d actually buy and love, married with a cool neighborhood,” said Azria, who will host a party tonight before the shop officially opens.

Soon ALF will be able to offer more than clothes; the company recently inked licensing deals with Steven Madden for bags that will roll out at year’s end and for costume jewelry with K&M Accessories, which will launch for spring 2018.

Azria’s playfully sophisticated, French aesthetic will infuse all categories of the brand, which is inspired by Seventies Paris and California ease and offers classic pieces with a twist, such as pleated skirts, pussy-bow blouses, tweed blazers, leather moto jackets and mules. Azria has also collaborated with L.A. premium denim brand Earnest Sewn.

Offering bi-monthly deliveries, the majority of pieces are priced at less than $100 retail, while shoes start at $150 and leather jackets at $495. Azria’s business model melds old-school traditional retail learnings with disruptive practices, which she hopes will shake up and revive the retail landscape.