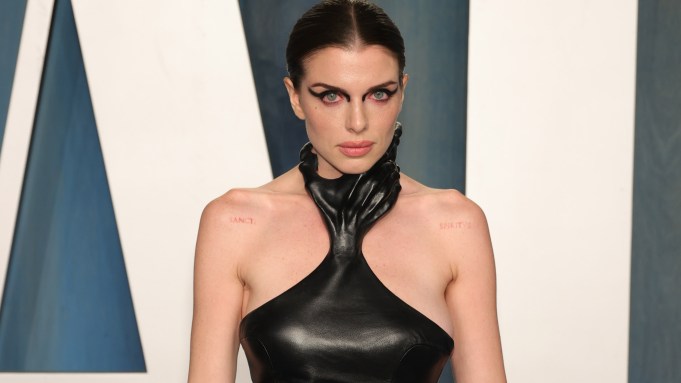 Alexander Wang has tapped a number of famous faces for the launch of his “Bodywear” line, including Julia Fox.

The model and actress, who is known to work closely with the controversial designer, posed for the new line, which includes everyday essentials that combine loungewear and underwear.

In one of the pictures, Fox is seen posing on top of a yellow New York City cab, which is donning a pair of white underwear on its hood, wearing a white plunging bra and matching biker shorts from the “Bodywear” line paired with denim slouch heeled boots. She has her brown hair down and her usually-dark eyebrows have been bleached.

about 70% of the human body is made up of: a) blood b) water. c) bodywear. the answer is c) bodywear *ding ding ding* whenever, wherever. shop bodywear online and in-store now at alexanderwang. #awbodywear #wheneverwherever #alexanderwang

As part of the campaign, Fox, best known for her breakout role in “Uncut Gems,” also did an interview segment with strangers in the cab, asking them questions about the line, giving them a chance to win products from the new collection.

Other famous faces fronting the campaign include Lisa Rinna from “The Real Housewives of Beverly Hills” and Anastasia Karanikolaou, a model and television personality best known for her close relationship with Kylie Jenner.

The collection is one of the designer’s newest ones since misconduct allegations regarding Wang emerged in December 2020.

After being accused of sexual misconduct and one instance of sexual assault, Wang acknowledged the allegations and vowed to do better, but did not apologize.

Wang faced a blizzard of media coverage after being accused of sexual misconduct by 11 men. With a few exceptions, most of the designer’s accusers were not initially identified.

In April, Wang made a comeback with a runway show in Los Angeles’ Chinatown, with a slew of famous models, such as Adriana Lima, walking his show, a charitable turn and no media interviews allowed.