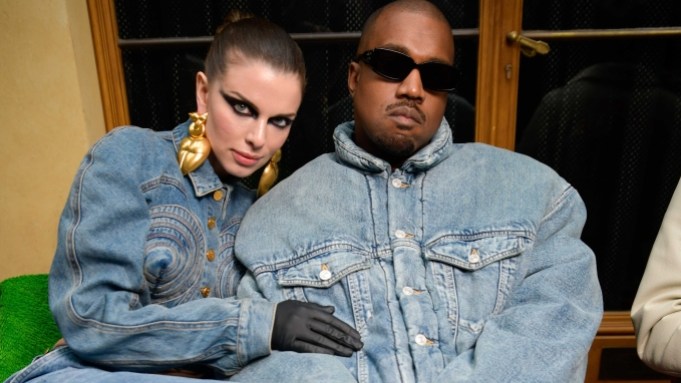 Julia Fox has been taking Paris by storm in the last week, and her name may sound familiar for a number of reasons.

The actress is most well-known for her debut performance in the 2019 crime movie, “Uncut Gems,” which was directed by the Safdie brothers and starred Adam Sandler, LaKeith Stanfield and Idina Menzel, among others. For her role, she was nominated for the Breakthrough Actor Award at the 2019 Gotham Awards.

As a model, Fox also appeared in a Barbie and Ken-themed shoot with Paper magazine in November 2019, alongside “Saturday Night Live” star Pete Davidson. She also did campaigns for Coach and Diesel, and editorials for Vogue, Vogue Italia, Wonderland, CR Fashion Book, V and Interview.

Over the years, the actress continued to rise in her career, attending red carpet events and fashion shows for Thom Browne, Schiaparelli, Lanvin, Valentino and Moschino.

However, as of late, Fox has been making waves for her stylish appearances at couture week in Paris with none other than Ye, formerly known as Kanye West, by her side.

In an article she wrote for Interview magazine, she confirmed that she and the rapper have been dating since they met in Miami on New Year’s Eve, stating “it was an instant connection.”

The two apparently caused a frenzy outside the Kenzo fall 2022 show earlier this week, where Fox told WWD she was wearing Schiaparelli creative director Daniel Roseberry’s personal pair of Carhartt jeans. “I took the pants off of his body and he was very kind to let me wear them,” she said.

She finished the look with a Schiaparelli denim jacket with conical breasts, which she matched with oversize gilded earrings shaped like buttocks to complete her Canadian tuxedo to match with Ye, who also wore denim head-to-toe by Balenciaga.

Shortly after, the two changed to go to Rick Owens and Michèle Lamy’s house in Paris. Fox changed into a one-shoulder leather red dress by the designer paired with thigh-high silver boots by Balenciaga and a black leather trench.

On Monday, the two stepped out once again in matching ensembles, this time in all-black leather for Schiaparelli’s spring 2022 haute couture show. With the help of stylists Peri Rosenzweig and Briana Andalore and makeup artist Daniel Kolaric, Fox wore a black Schiaparelli minidress with thigh-high leather boots and signature jewelry pieces by the designer.

Observers have commented on the similarity between Fox’s Balenciaga outfits and those worn by Ye’s soon-to-be ex-wife, Kim Kardashian West (who also happens to be reportedly dating Davidson). Following their second date in New York City on Jan. 4, the rapper surprised Fox by organizing a fitting in a hotel room stocked with outfits designed by Glenn Martens for Diesel.

Fox also clarified that her relationship with West is not based on money or status at all.

“Honey, I’ve dated billionaires my entire adult life, let’s keep it real,” she said on an episode of “Forbidden Fruits,” her podcast with Niki Takesh. “I just care about making my art and putting things into the world. That is more thrilling to me now than, like, eyes on me. I couldn’t care less.”

Click through the gallery above to see some of Julia Fox’s best style moments so far.