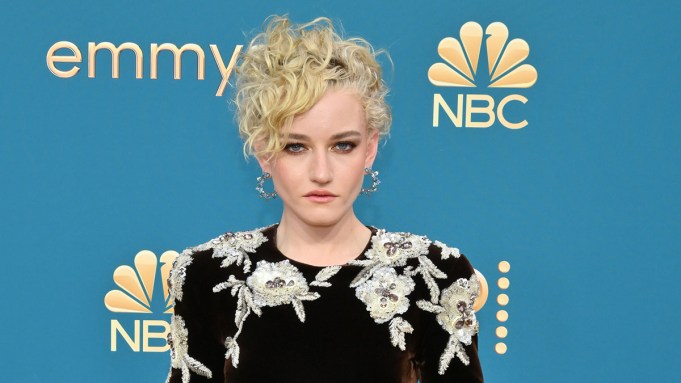 Julia Garner dazzled at the 74th annual Primetime Emmy Awards on Monday in Los Angeles. The actress was nominated in two categories, including the award ceremony’s Outstanding Lead Actress in a Limited or Anthology Series or Movie for her role as Anna Delvey in Netflix’s “Inventing Anna” and Outstanding Supporting Actress in a Drama Series for “Ozark,” in which she plays Ruth Langmore, also on the streaming platform. Garner won her third Emmy in the latter category.

Garner arrived on the carpet in a Gucci dress, which featured long-sleeves, floral embellishments and a diamond-shaped cutout across the midsection. The actress wore her dress with nude platform heels and multi-hued Swarovski crystal hoop earrings.

Elizabeth Saltzman styled Garner and has worked with Eiza Gonzalez, Julianne Moore, Deepika Padukone, Gwyneth Paltrow and Jane Levy. Saltzman previously styled Garner for the 2021 Met Gala, where the actress wore a sparkling Stella McCartney rhinestone-embellished gown and Harry Winston jewels, and more recently, her appearance on “Jimmy Kimmel Live!” in July. For the segment, she wore a satin minidress by Prada featuring a crystal-embellished belt.

In June, the actress was offered to play Madonna in a biopic about the music legend.

The 2022 Emmy Awards honored the best performances and programs in television. “Saturday Night Live” cast member Kenan Thompson hosted the event at the Microsoft Theater in Los Angeles. HBO’s “Succession” lead the nominations with 25 nods, followed by “Ted Lasso” (20), “The White Lotus” (20), “Hacks” (17) and “Only Murders in the Building” (17). The Geena Davis Institute on Gender in Media was presented with the Governors Award in recognition of their work to promote gender balance in the entertainment industry.