Julia Roberts was the first to lay eyes on the late Seventies Yves Saint Laurent long-sleeve, short black dress she donned for the Golden Globes. 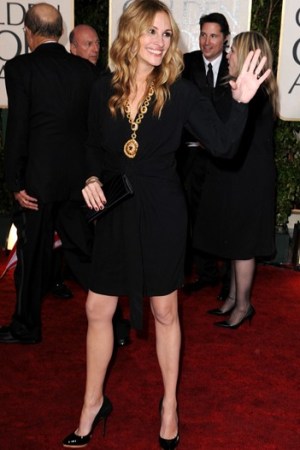 ONE-STOP FROCK: Apparently, Julia Roberts was the first to lay eyes on the late Seventies Yves Saint Laurent long-sleeve, short black dress she donned for Sunday’s Golden Globes. During one of her jaunts to Frock NYC, a NoLIta boutique the Academy Award-winning actress has dropped into before, the Manhattanite tried it on along with a few other pieces. Her stylist later purchased her finds, according to owner Evan Ross, who was completely in the dark about the prospect of having a red-carpet moment. “I was at home having a quiet night after a weeklong buying trip. When she walked in, I thought, ‘Wait a minute. That’s our dress,’” he said.

Instead of going the loaner route, as is the calling card of choice with many red-carpet walkers, Roberts plunked down some of her cold hard cash. Ross couldn’t give an exact price but said other dresses of that ilk range from $800 to $1,200. What a steal? “Totally,” he said.

DOWN IS THE NEW UP: Lines were not only forming in front of the Milan Moncler store during men’s fashion week. The outerwear company is also drawing interest from investors. According to a Bloomberg report, private equity firm The Carlyle Group, which holds a 48 percent stake in Moncler, is deflecting suitors and instead mulling a listing of the brand next year, after buying a firm that could be integrated into Moncler. A Milan-based source confirmed Moncler is looking at taking control of a “complementary, noncompeting brand that would allow it to leverage on synergies in marketing, distribution and retail.” The brand, which in 2008 reported sales of 150 million euros, or $220 million at average exchange rates, and is highly recognizable for its fashion-oriented down jackets, would benefit from a growth through an acquisition, said the source.

FULL FIGURES: In the midst of the men’s shows, Dolce & Gabbana Holding Group Srl said consolidated revenues dropped 5 percent to 1.2 billion euros, or $1.7 billion, from 1.26 billion euros, or $1.78 billion. In the period, the number of directly operated stores grew to 117 from 108. Cristiana Ruella, the group’s managing director and board member, said the “positive signals from retail sales and the excellent results of pre-fall 2010 sales lead us to look at the future with an optimistic attitude and to continue to invest on all projects focused on a better and more complete expression of the brand.”

STAGE LEFT: It will be the first Paris couture season next week without a Christian Lacroix collection. But the designer is still in hot demand for stage costumes, and his latest designs will be unveiled on Feb. 4, when the Baroque opera “Agrippina” premieres at the State Opera Unter den Linden in Berlin. The George Frideric Handel opera not only marks Lacroix’s debut at the Berlin opera house, but that of French director Vincent Boussard and set designer Vincent Lemaire, as well. For the current staging of the 300-year-old work, Lacroix has been shuttling between the French and German capitals since November to personally oversee the fittings. Alexandrina Pendatchanska sings the title role, accompanied by the Akademie für Alte Musik Berlin under the direction of René Jacobs.

LIGHTS, CAMERA, FASHION: Men’s fashion shows keep getting more and more cinematic. Italian designer Antonio Marras will be taking to a director’s chair for the finale of his upcoming Kenzo show in Paris. The display, to be staged at the Kenzo store on the Place des Victoires, promises to bring traffic to a halt. Models will take to the street to re-create a scene from a vintage French movie, with Marras directing things. Meanwhile, Kenzo is launching a new style of men’s underwear featuring an outside pocket for carrying a condom, as part of an initiative to raise money for AIDS research. French swimmer Frédérick Bousquet, who is expecting a child with Olympic swimming champion Laure Manaudou, will model the briefs on the cover of the February edition of gay magazine Têtu. The underwear goes on sale in Kenzo stores this month, priced at 20 euros, or $28.

EDGE OF NIGHT: Provocateur, the Meatpacking District’s latest hot spot du jour, located in the Hotel Gansevoort, tapped Rag & Bone to outfit waitresses in the mini-est of leather sheath dresses. “We’ve had a great relationship with Hotel Gansevoort since Day One, having provided the uniforms for their Turks and Caicos property,” said David Neville, co-founder of the trendy label. For those taken by the look, the design is available by special order at Rag & Bone’s West Village boutique.

That’s not the only fashion connection made by the $5 million nightlife venue. Scott Vincent Borba, founder of the Borba skin care line, curated the cocktail menu, with each drink aimed at improving a specific skin issue. The beauty theme will be apt when Jennifer Lopez hosts a bash tonight for makeup artist Scott Barnes, toasting his new book, “About Face.” Lopez wrote the foreword to the beauty tome.

BAD BOY YVES: A new book about Yves Saint Laurent explores the late designer’s demons, but one person won’t be reading it: his former business partner and companion Pierre Bergé. “Saint Laurent, mauvais garçon” (“Saint Laurent, bad boy”) by French journalist Marie-Dominique Lelièvre is scheduled to be released today by publisher Flammarion. Bergé dismissed the tome, which was written without his consent or collaboration. “I don’t care. It’s a book that I have not read and will not be reading,” he said. Bergé added that he had turned down a request to be interviewed for the book, but would have been happy to read the manuscript to check facts — and even corroborate details of Saint Laurent’s well-known battles with drugs and alcohol. It is not the first time that Lelièvre, known for her incisive profiles in daily Libération, has tackled a sacred figure of French culture: she has previously penned biographies of writer Françoise Sagan and singer-songwriter Serge Gainsbourg.

TOO BIG TO FAIL: To mark the anniversary of its one millionth order, Net-a-porter is giving away a $40,000 shopping spree to one winner chosen at random. Anyone can register once; a purchase is not required. “We said, it’s got to be a fabulous over-the-top number,” said Net-a-porter vice president of sales and marketing Alison Loehnis. To put the number in perspective, it equals a capsule Balmain wardrobe, 160 pairs of jeans or a pair of Christian Louboutin shoes every day for two months, she said. The contest starts Thursday and runs for three weeks. It will be advertised through e-mail and social media.