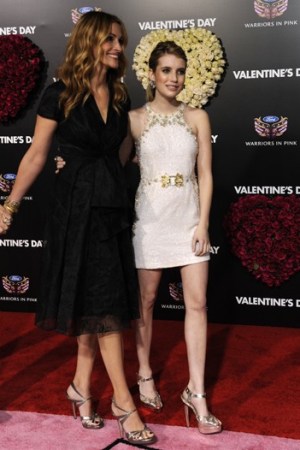 LOVE STORY: Who in Hollywood isn’t in “Valentine’s Day?” Julia Roberts, Anne Hathaway, Jessica Alba, Jessica Biel, Jennifer Garner, Taylor Swift, Bradley Cooper, Patrick Dempsey, Taylor Lautner, Ashton Kutcher and Shirley MacLaine all strutted down the rose petal-strewn red carpet at Grauman’s Chinese Theatre Monday night for the film’s premiere. (Swift and Lautner got the loudest reception from fans camped out across the street.) While several stars skipped the press line, perhaps avoiding questions about their own love lives, Hathaway offered her take on the Hallmark holiday: “I usually forget that [Valentine’s Day] is coming, but I celebrate it in style. I think it’s meant to be fun and if you hate it then you are taking it too seriously,” she said.

This story first appeared in the February 10, 2010 issue of WWD. Subscribe Today.

DICAPRIO AND SCORSESE TO BE FETED: Giorgio Armani is throwing its weight behind “Shutter Island,” Martin Scorsese’s new psychological thriller starring Leonardo DiCaprio. Both men will be at the brand’s Fifth Avenue flagship Tuesday night for a cocktail party in their honor celebrating the film’s Feb. 19 release. It’s likely Scorsese and DiCaprio will be joined by more famous friends of Armani. Remember, this time last year, Alicia Keys, Victoria Beckham, John Mayer, Josh Hartnett, Alison Pill and Liam Neeson turned out for the store’s grand opening.

LANCOME PLUGS IN: The U.S. division of Lancôme has signed YouTube makeup-artistry star Michelle Phan as the brand’s official video makeup artist, WWD has learned. The move, which is expected to be revealed later today, would make Lancôme the first prestige beauty house to have a social media star on board. Executives at the L’Oréal-owned brand could not be reached for comment, but industry sources indicate Phan will be producing dedicated videos featuring Lancôme products. The 22-year-old Phan of Tampa, Fla., has her own channel on YouTube, where she has broadcast 82 how-to makeup videos and drawn 106,407,340 views, according to the site. Her videos average 1 million views each and Phan has 530,000 subscribers. Those figures would appear to eclipse the popular British makeup star Lauren Luke, who has 332,682 subscribers, 234 videos and 69,674,340 views. However, Luke has marketed her own makeup brand, retailed at Sephora, published a book and has her own avatar in a Nintendo makeover game.

FRENCH OPEN: Come fall, Opening Ceremony will be speaking with a French accent. The hip New York-based specialty retailer plans to take in Paris Fashion Week next month with a mission to uncover fresh local talent, which it plans to mix with clothes from the likes of Jean Paul Gaultier and Isabel Marant. Co-owner Humberto Leon said the store already booked some French men’s brands, including Alexis Mabille and Kitsuné, for the promotion. “We’ve never really carried French designers,” he said. Vive la différence.

COCO AT HOME: In the summer of 1962, photographer Douglas Kirkland was allowed a rare glimpse behind the scenes of Coco Chanel’s apartment and atelier at 31 Rue Cambon. The images he shot on assignment for Look magazine will be shown at the Galerie Basia Embiricos in Paris from Feb. 11 to March 15. The portraits show Chanel, then in her late 70s, fitting models while wearing her trademark straw hat, a cigarette dangling from her lips. The Los Angeles-based Kirkland, who has photographed celebrities ranging from Marilyn Monroe to Angelina Jolie, also captured rare shots of the famously curt designer relaxing and smiling.

SNOW ANGELS: There were diamonds but seemingly no divas at Leviev on Tuesday afternoon at a pre-gala kick off luncheon for City Harvest. Hosts Nina Rennert Davidson and Heather Mnuchin were essentially coated in diamonds, emeralds and all sorts of enormous gemstones. Mnuchin, who wore dangling diamond earrings, a necklace and bracelet on loan from Leviev, said, “Everyone is looking here,” pointing to the 70-plus-carat diamond necklace she was wearing. “I keep saying look up here [at my face].”

A portion of the proceeds from sales during the luncheon benefited City Harvest, which feeds the hungry in New York. “If we sell everything that Nina’s wearing today, we’ll be set,” Mnuchin quipped.

HERE COMES THE SUN: Following numerous eyewear launches for spring (Alexander Wang, Erdem Moralioglu) comes another spate of sunglass debuts, including those by Maria Cornejo and Miho Aoki and Thuy Pham of United Bamboo. The hook here? The collections are being orchestrated by an artist-musician, Hisham Akira Bharoocha of the band Soft Circle. Bharoocha enlisted seven collaborators for the project, named Phosphorescence: the aforementioned fashion designers, Erin Wasson, Opening Ceremony, streetwear label Rockers NYC, No Age bandmates Randy Randall and Dean Allen, and Kim Gordon of Sonic Youth. Whereas Cornejo’s designs mine her collection’s roots in simple geometric shapes — rimless semi-circle lenses, for instance — United Bamboo’s single pair is a geeky twist on those “Risky Business” Ray-Ban shades. “We took the Wayfarer,” said Pham, “and made [the frame] thick and nerdy-looking.” Gordon, meanwhile, opted for a pop of pigment. “I wanted to do something with a very cosmetic color, like a matte pink, a Sixties lip color,” she said, “but with a contemporary style.” Wholesale prices for the sunglasses, which are produced in Japan and come in various colors per design, range from $100 to $120. Opening Ceremony will sell the line while the individual designers will also retail their own collection.

GREEN SCREEN: Stella McCartney rounded up pals including Vivienne Westwood, Thandie Newton and Richard E. Grant to attend a screening of the Oscar-nominated documentary “Food Inc.,” which the designer hosted Monday night. McCartney was especially pleased she’d managed to entice a crowd out on a snowy London evening for the film, which she was showing in support of the McCartney family’s initiative Meat Free Monday. “This is not a film that people jump out of their warm sofas and beds to come and see — it’s a scary film and the subject matter is terrifying and shocking, but I have to say it’s one of the most incredible and important films that I have ever seen,” said McCartney of the documentary, which lifts the lid on a handful of powerful food corporations, which, the film argues, control the U.S. food industry.