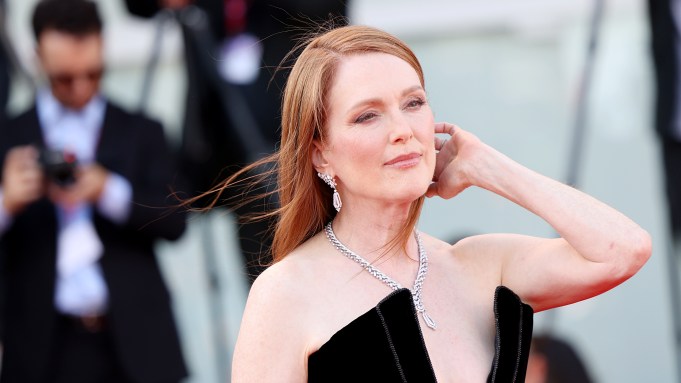 Julianne Moore went with an elegant look for her latest appearance during the 2022 Venice Film Festival.

The Oscar-winning actress attended the premiere of “Tár” on Thursday night during the second day of the film festival. For the red carpet, Moore wore a black plunging-neck dress from Armani Privé’s fall 2022 couture collection. She accented the look with jewelry from Cartier, wearing Cartier Sixième Sens High Jewelry diamond drop earrings set in platinum and a matching diamond necklace. The look was styled by Kate Young.

The actress was joined at the premiere by the likes of Cate Blanchett, Kelsey Merritt, Georgina Rodriguez and Noémie Merlant, among others.

Moore is the jury president for the 79th Venice International Film Festival. She, along with the rest of the jury, will decide who wins the coveted Golden Lion award for best film.

The actress has had a streak of standout fashion looks since the Venice Film Festival kicked off earlier this week. Moore started the festival at the inaugural cocktails wearing a black and yellow polka dot dress from Alaïa, then attended the photo-call for “White Noise” on Wedesday wearing an off-white oversize tuxedo from Celine. She later attended the film’s premiere wearing a multicolored, sequined look from Valentino.