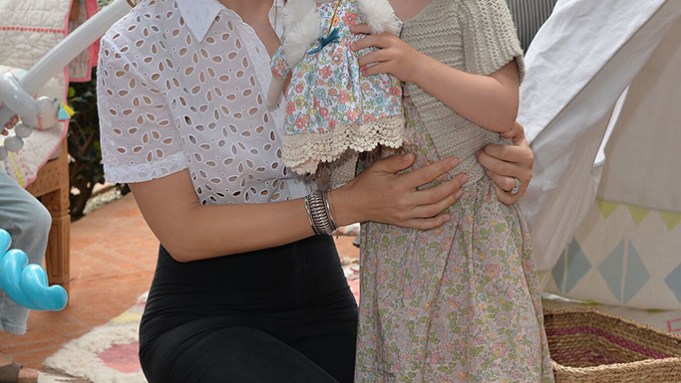 NO MORE PENCILS, NO MORE BOOKS: School’s out for summer, but that doesn’t mean the fashion flock and Hollywood crowd get a day off.

Julie Bowen, who plays a mother on “Modern Family” and has three tween sons of her own, is deep in Mom mode, shuttling her boys to various camps where they can perfect their skills in surfing, throwing water balloons and playing the video game Minecraft. “Apparently, Minecraft is not terrible for your brain,” she said.

On Saturday, Bowen’s brood enriched their minds with crafts and vegan Mexican treats at the shindig celebrating the launch of Jenni Kayne’s collaboration with Pottery Barn Kids at Gracias Madre in West Hollywood, Calif. Johnny Knoxville resembled a patient dad more than a testosterone-fueled rabble-rouser while waiting for his son to request balloons twisted into swords. Busy Philipps was amused by a toddler who schlepped a mini floral-printed paper suitcase from the collection. Jason Bateman, Jennifer Meyer, Greg Lauren, Soleil Moon Frye and others joined the festivities, cohosted by Baby2Baby’s Kelly Sawyer and Norah Weinstein, amid a pastel-tinted teepee and cat dolls wearing fur stoles from Pottery Barn Kids’ first-ever design collaboration, which is launching this month.

On the other side of town, at Brooks Brothers’ Rodeo Drive store in Beverly Hills, Yara Shahidi proved she was quickly outgrowing kid stuff. The brand first dressed the star of “Black-ish” in one of its boys’ suits and tuxedo shirts when she was 10 for a press conference, and she used to steal her mom’s non-wrinkle button ups to wear under her school uniform.

“I’m naturally a preppier person,” said Shahidi, 15, who accessorized a red blazer and plaid shorts with a bow tie for the golf-themed party benefiting St. Jude Children’s Research Hospital. “I wear oxfords as my walking shoe.”

Shahidi will put her style on bigger display in a forthcoming ad campaign for a women’s brand she declined to name. “I can’t say anything right now,” she said. “Stay tuned this fall.”

Costume designer Janie Bryant is also working through the summer to prep for projects in the autumn. In addition to creating a second collection for Shoes of Prey, she is readying for the launch in July of her dresses designed with Black Halo and the debut this fall of the “Mod and modern” uniforms she drew up for the Watergate Hotel in Washington. Moreover, her working relationship with Brooks Brothers is ongoing. It dated back to the very first season of “Mad Men” and lasted eight years until the series finale last month.

“I consider myself part of the Brooks Brothers family,” she said at the soirée, which also welcomed actors Jerry O’Connell, Dan Bucatinsky and Holly Marie Combs. “Even if they want to kick me out, they can’t.”