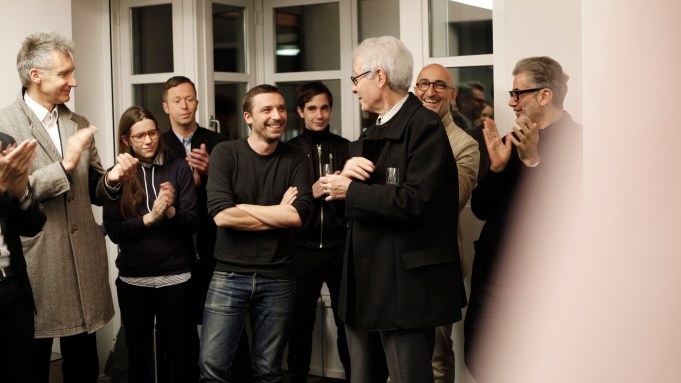 JURY DUTY: Paco Rabanne’s creative director for women’s wear Julien Dossena is to preside over the jury of the 31st edition of the International Festival of Fashion and Photography, scheduled for April 21 to 25 in Hyères, France. (The Puig-owned fashion house is the edition’s guest of honor.)

The festival has been a launchpad for many fashion designers, including Dossena, Viktor & Rolf, Christian Wijnants, Felipe Oliveira Baptista and Anthony Vaccarello.

Festival director Jean-Pierre Blanc hosted a press conference at Puig’s headquarters on 65 Avenue des Champs-Elysées on Friday night to reveal the complete lineup, including the finalists for the fashion prize. The jury for the photography competition is to meet on Monday.

Outfits from each contender were displayed at Paco Rabanne’s showroom, packed with fashion personalities as couture week wrapped up the day before.

“Hyères was a memorable experience. I was 23. I was still a student at La Cambre in Brussels. My first professional experience came after Hyères,” said Dossena who inaugurated Paco Rabanne’s new store on Rue Cambon earlier this week, marking the house’s return to the retail scene.

It’s a comeback to the festival for the designer who earned an honorary award there (as well as a prize from fast-fashion firm 1.2.3) a decade ago. Serge Carreira, a lecturer at Sciences Po Paris, recalled being a member of the 2006 jury that was presided over by Ann Demeulemeester, with retailer Maria Luisa Poumaillou. “There were two very good contenders: Julien Dossena and Anthony Vaccarello. It was a nice crop.”

Earlier in the day, Dossena and jury members met with its jury to whittle down 10 finalists out of 54 who were short-listed from more than 300 entries.

Last year, Karl Lagerfeld and key members of his extended creative gang at Chanel headlined the 30th edition of the festival, with Virginie Viard, Chanel’s creative studio director, as president of the fashion jury.