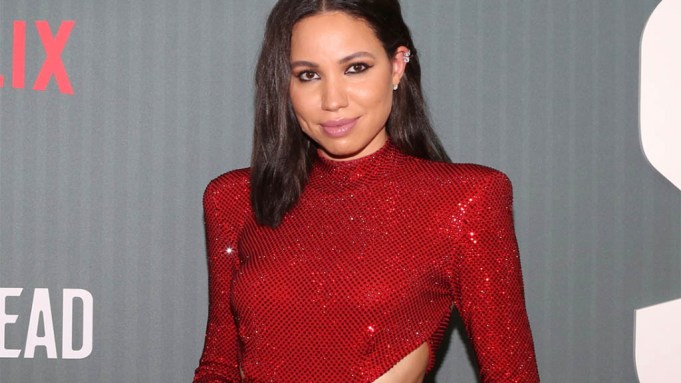 Jurnee Smollett went with a daring red carpet look for the premiere of her new film “Spiderhead.”

The actress attended the New York screening of the Netflix movie Wednesday night wearing a dress from Alexandre Vauthier’s fall 2022 ready-to-wear collection. Smollett’s look was a red, crystal-embellished cutout dress, which she paired with black pumps from Christian Louboutin and De Beers jewelry. The look was styled by Alexandra Mandelkorn.

Smollett rarely shies away from a standout fashion moment on the red carpet. She grabbed attention during the 2021 awards season when she wore high-fashion looks, including a Zuhair Murad pink ballgown at the SAG Awards, a feathered Elie Saab dress at the Oscars and a silver sequined Louis Vuitton suit at the Critics’ Choice Awards.

Earlier in the “Spiderhead” press tour, Smollett wore another look from Alexandre Vauthier: a pink sculptural jacket paired with a plaid pink skirt.

“Spiderhead” is described as a sci-fi thriller film that tells the story of two inmates, played by Smollett and Teller, who form a connection while in a state-of-the-art prison that’s run by a brilliant visionary (played by Chris Hemsworth) who is performing experiments with mind-altering drugs on his prisoners in exchange for commuted sentences. The film debuts on Netflix on Friday.

The Standout Fashion Looks from the 2022 Tribeca Film Festival