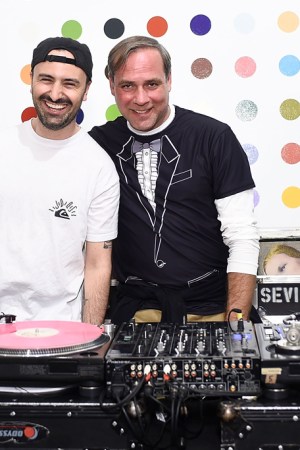 SURFIN’ SAFARI: Already a destination for fashion and art, Just One Eye added surf spot and brand builder to its mission statement on Wednesday night, when it hosted the launch of the three-year-long collaboration between London-based designer Julien David and Southern Californian action sports company Quiksilver. David put a stylish but also eco-friendly spin on his surf line-up, using organic cotton, bio rubber and polyester recycled from plastic bottles for the T-shirts, tuxedo-print wetsuits and boardshorts that he juxtaposed next to a $2,400 neon jacquard biker jacket from his signature line. The next installment in David’s collaboration is a snowboarding collection, including waterproof jackets, hats, gloves, fleece tops and backpacks, set to hit stores in January.

David, who shredded sidewalks in the Parisian suburbs in Quiksilver Ts and snowboarding jackets when he was a teen, plans to put his designs to the test while soaking up the sun at the Coachella Valley Music and Arts Festival this weekend. FKA twigs, SBTRKT and Drake headed his list of must-see acts. “I’m going to wear the shorts, for sure,” he said.

Also checking out the colorful shorts at the Los Angeles boutique was a hodgepodge of guests linked through fashion, entertainment, art and surfing, including Balthazar and Rosetta Getty, Lucy Punch, Minnie Mortimer, Tasya van Ree and Dinos Chapman. Paolo Russo, buyer and co-owner of Just One Eye, was happy to stay on land. “If there’s something I know that I’ll never do, it is to surf,” she said, over the din of dance tunes spun by Paul Sevigny.

Balthazar Getty was up for surfing as a metaphor. In addition to penning a semi-autobiographical screenplay that he described as a “redemption story,” he’s working with his wife, Rosetta, on her fashion line, which is sold at Just One Eye. Plus, he’s producing a mix of hip-hop, Latin and electro-pop at his record label called Purplehaus Music. “We’re building different brands from fashion to music to lifestyle,” he said.