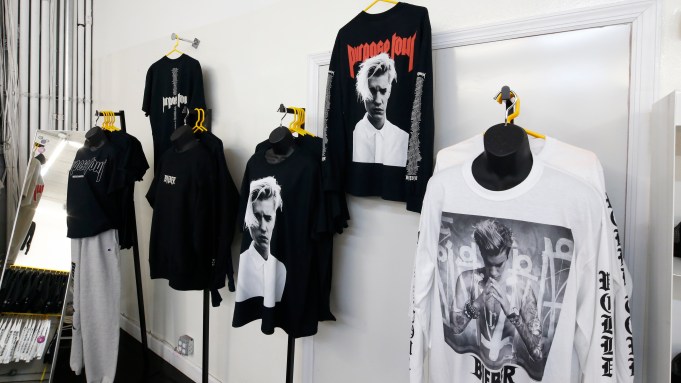 The Millennial-minded social media platform and retailer is hosting a two-day pop-up that opens today and is dedicated to Bieber’s concert merchandise, which includes a denim jacket, T-shirts, hoodies, hats and sweatpants that retail from $30 to $360. The pop-up will also include two limited-edition hoodies that are exclusive to VFiles and a T-shirt designed specifically for his Brooklyn concert, which will be held tonight and tomorrow night at the Barclays Center. Customers, who were let in 20 at a time, are only allowed to buy one of each item.

The line for the pop-up, which snaked down Mercer Street, was filled with mostly young people wearing other merchandise from their favorite pop stars — Beyoncé’s Ivy Park logo and Kanye West’s “The Life of Pablo” graphics were scattered through the crowd.

Shoppers in line were either Beliebers or they worshiped at the altar of Jerry Lorenzo, the Fear of God designer who helped with the merchandise and designed custom pieces for the tour. Lorenzo was set to make an appearance at the pop-up, but in a very Bieber-like move, he refused press interviews at the last minute.

“I’m a Jerry Lorenzo fan,” said a shopper who identified himself as First and started standing in line around midnight. “But I’m a little bit of a Bieber fan, too, because I’m Canadian. So I’m just out here supporting another Canadian.”