The designer is passing through the city to launch his second line for the U.K. chain. 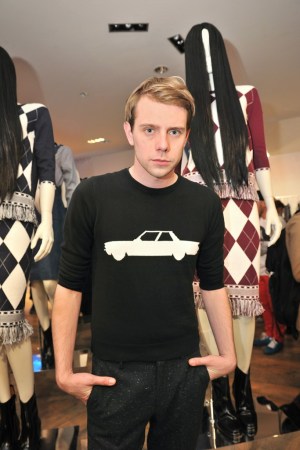 JAPAN PLAN: J.W. Anderson is passing through Tokyo to launch his second collaboration line with Topshop. The designer held court at a cocktail party Thursday night in a small gallery, attended by plenty of Tokyo’s young and fashionable.

Anderson said that “nineties minimalism” served as his inspiration again this season. This collection is also the first time the designer worked with denim for the U.K. chain. He worked the material into kilts, apron dresses, jackets and- of course- jeans.

Before leaving the Japanese capital on Sunday, Anderson said he plans to focus on researching possible retail opportunities for his own brand.

“I’m doing a lot of different store site visits,” he said. “We’re thinking of maybe opening something out here next year. We’re opening a store in London at the end of the year, and the idea is to kind of start going from there.”