Two outfits and a harness retail for around $120.

A look from K9Wear, designed by Nicole Franklin.

K9Wear, a new company that makes apparel and harnesses for dogs, will launch globally Nov. 25 in time for holiday.

James Straggas is cofounder and chief executive officer, Mike Connolly is cofounder and Andy Carter is chief operating officer and a partner in the company. Nicole Franklin is design director. They are working with Jeffrey Banks as a designer collaborator.

“The concept is, most of the time, when people try to dress their dogs in clothing, the clothing is not necessarily functional. It looks cute, but doesn’t really work, utilitarian-wise. And a lot of the dogs don’t like to wear clothing and do everything in their power to get the clothing off of them, it’s uncomfortable,” said Banks.

“The dog is happy and is unaware they’re wearing clothing,” said Straggas.

The harness was developed over the past three years under the advisement of Carter, a former accessories executive and an American Kennel Club judge, and Tom DeVincentis, a veterinarian.

Banks will be the first designer collaborator of the brand, and the plan is to go after a group of designers who can create both dog apparel and human apparel. It’s all made in New York City.  So far they’ve gotten positive interest from such designers as John Bartlett and Nicole Miller. 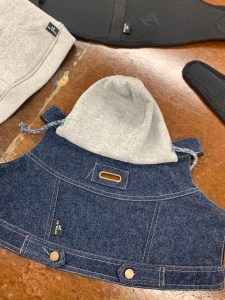 One of Nicole Franklin’s designs for K9Wear.  courtesy shot.

The interchangeable apparel harness, which goes around the neck and torso, is made of a mesh material so it’s breathable and strong (the military uses it for its dog harnesses), and there’s a metal buckle. The outfits are threaded through it.

Banks has designed a jean jacket, a waxed cotton quilted jacket and a wool duffle toggle coat. They are unisex, but come in pink, lavender and pearl for female dogs and black, classic yellow, royal blue, orange and red for male dogs.

Asked about criteria for dog clothing, Straggas said all the rules are thrown out the window. “All that’s needed from a designer standpoint are the drawings and we can mirror that in the factory. It’s more like a horse blanket to look as if it’s a T-shirt,” he said.

“Everything is on the system of the harness,” said Banks. “Once you have the harness that fits, the clothing actually clicks onto the harness so the dog doesn’t realize it’s wearing clothing. That’s what makes this so unique.”

The average retail price of an outfit is between $40 and $50. For two outfits and the harness, the retail price is about $120. Sizes range from XXS for chihuahuas to 4XL for Saint Bernards, Burmese Mountain Dogs and Great Danes.

The outfits and required harness will be sold at K9Wear.com.

Straggas said the designers will be donating a percentage of their sales to charity.

Part of the appeal for a designer will be that they can design an adult jacket or sweater to coordinate with their pet’s clothing and sell it both on the K9Wear site and their own web sites, creating a new opportunity for a designer business.

“People with dogs will spend any amount of money on them,” said Carter. “Especially those [dog-owners] who are home during a pandemic.”