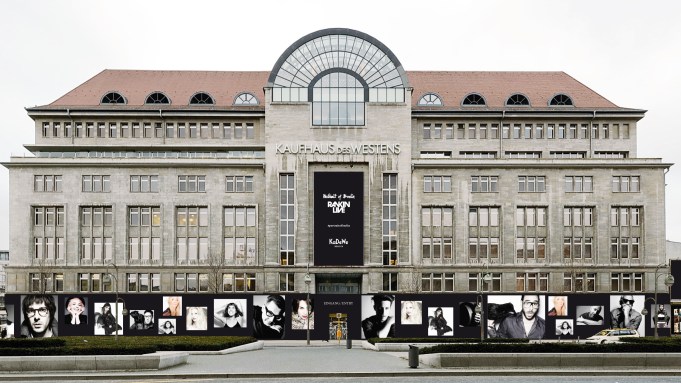 BOWING IN BERLIN: The German retailer KaDeWe has tapped the British photographer Rankin for an installation and live photo shoot experience in Berlin.

While the 645,834-square-foot department store is undergoing renovation by Dutch architect Rem Koolhaas, a series of portraits taken by Rankin will be exhibited from mid-May until the end of June along the 360-foot wall dubbed the “Portrait of Berlin.” The store remains open for business.

A “RankinLive” photo shoot will take place on April 30, in the retailer’s atrium complete with photographic portrait studio, hair and makeup station. Members of the public will have the chance to have their hair and makeup done with portraits taken by Rankin, with some selected through a social media campaign. To coincide with the photo shoot and installation, a “Rankomat” selfie booth, serviced by Rankin Studios, will be set up so everyone to take part.

“I think every city has its aesthetics doesn’t it?” Rankin told WWD. “I don’t know what it will be like in Berlin. I haven’t been in a while. There are a lot of British people that go to Berlin. Artists make a beeline because it’s a place to create art. It’s a creative community. I’ve got friends who live there full time. Loads of my friends have gone and spent time there. I like Germany, in general. I do a lot with Heidi Klum, obviously. It’s a great place to visit.”

While the photographer has shot famous names in fashion including Kate Moss, Erin O’Connor and Cara Delevingne, he said he’s looking forward to involving the public. “I love taking pictures of different people,” he said. “To represent it on the (store hoarding) while it’s being redone, it’s really a big thing. It’s a real treat. It’s what I enjoy doing the most — taking pictures of people. I love the idea, it’s not celebrities. I love photographing everybody. I like people for the sake of what they are as people, not fame.”