Purple Gets Pride of Place on Inauguration Day: The Message Behind It

On the momentous occasion that marked the changing of the guard in American leadership Wednesday, purple seemed the color to usher in the new era. 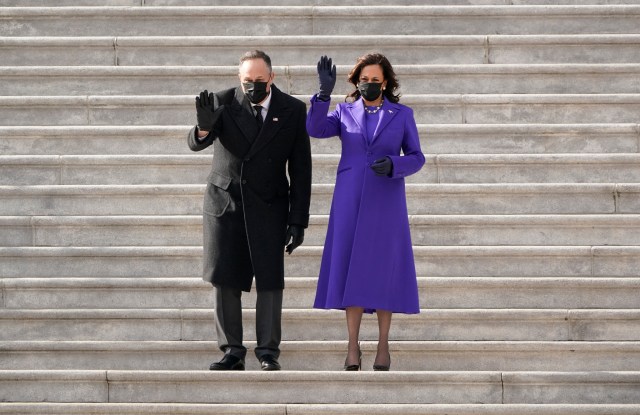 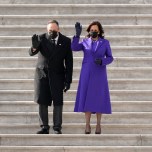 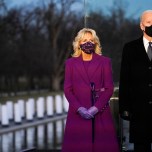 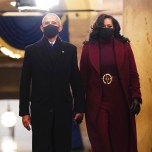 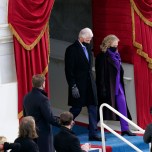 On the momentous occasion that marked the changing of the guard in American leadership Wednesday, purple seemed the color to usher in a new era.

It’s a hue that speaks to unity, a key theme in President Joe Biden’s inaugural address as well as other poignant messages from the day.

“The significance of purple in this moment is that it represents a blending and coming together of the red and blue, which are the two colors that represent each of the major political parties in the U.S.,” Laurie Pressman, vice president of the Pantone Color Institute, told WWD on Wednesday.

Her look and, in particular the color, as CNN journalist Abby Phillip noted in coverage of the inauguration, was steeped in added significance.

“I want to make a note about the color she’s wearing and not to be trite about it but Kamala Harris is wearing purple, which is something that’s pretty significant to her. When she ran for president one of her colors of her campaign was purple…that is a nod to Shirley Chisholm [the first Black woman elected to the United States Congress] who ran for president as a Black woman decades ago and has inspired her political career,” Phillip said. “So you see Kamala Harris nodding to this major moment in American history for so many people, for so many women and people of color, for her sorority sisters in Alpha Kappa Alpha.”

Hillary Clinton, who was also in attendance at the event, wore a purple Ralph Lauren pantsuit. It was the same color she wore during her concession speech to Donald Trump in 2016.

Though First Lady Dr. Jill Biden wore blue for her husband’s swearing in, she chose purple on the eve of the inauguration, supporting independent New York designer Jonathan Cohen as she and the incoming president, along with Harris and her husband Douglas Emhoff, led a national mourning for the 400,000 Americans killed by the coronavirus pandemic.

Purple has long been known as a color of wisdom, of royalty, of balance between the stimulation of red and blue’s calm. It was also reported to be the color of the first ever synthetic dye, which changed the course of the color’s history in fashion. Perhaps a cue to this moment, Ultra Violet was Pantone’s color of the year in 2018.

“Additionally, purple is associated with creativity as well as those who take a visionary approach, so in this setting it could also be deemed as being expressive of the creative and innovative ideas that will result from the collaboration of so many different people coming together to develop working solutions to the challenges we are facing now and into the future,” Pressman said. “Each together points to unity which I think was the big takeaway and message of the day.”

In his inaugural speech, endeavoring to signify a new sentiment among the country’s leadership, President Biden said, “Unity is the path forward,” and that, “We must end this uncivil war that pits red against blue.”