Yeti chic is all the rage — that’s if Kanye West’s and Amber Rose’s Paris Fashion Week attire is anything to go by. 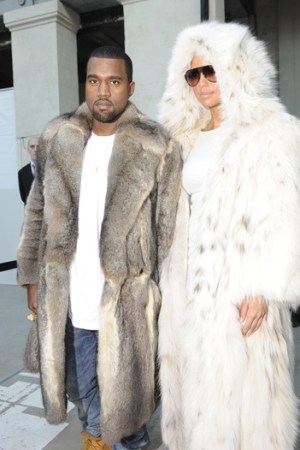 FUR BALL: Yeti chic is all the rage — that’s if Kanye West’s and Amber Rose’s Paris Fashion Week attire is anything to go by. The pair turned up to the Louis Vuitton men’s show on Thursday in matching fur coats fit for Narnia. Fellow front-rower Andre’s empire continues to expand, meanwhile. The diminutive night owl said his latest venture involves a private apartment on Rue Charlot in Paris’ Marais district, to be used for private dinners. He said he also has an exhibition of his drawings coming up at Colette and has designed a T-shirt for Purple magazine, featuring his graffiti scrawls over a photo by editor in chief Olivier Zahn. French actor Jeremy Kapone, who said it was his first catwalk show, said he’s been busy touring with his band, Kaponz & Spinoza, with whom he’s recording a second album, “Simple Songe” (“Simple Dream” in English). While facing the flashbulbs, Vahina Giocante joked that her studded Vuitton clutch was potentially lethal. “It doubles as a weapon of self defense,” said the actress, who is about to start shooting a movie in Marseilles about the late French gangster Francis le Belge.

BRUISE CONTROL: Chris Brown clearly does not fear bad publicity: the controversial R&B singer gamely posed alongside a bruised and bloodied Jean Paul Gaultier at the end of the French designer’s boxing-themed show. Gaultier’s injuries were fake, but the juxtaposition is bound to stir up memories of the photographs published last year of singer Rihanna after her assault at the hands of Brown, her boyfriend at the time. Brown pleaded guilty last summer to felony assault. Before the show, the singer said he was looking forward to the release in May of “Takers,” a heist movie in which he stars alongside Matt Dillon. Brown noted he is also open to any propositions in the fashion field, though he would prefer to collaborate with a label rather than launch a full line under his own name. “It has to kind of blend with what I’m doing because I’m so busy,” he said. Backstage, French actor Vincent Perez took snaps of makeup artists dabbing fake blood on the models for a story in Paris Match. French karate world champions Tiffany Fanjat and Laurence Fischer gave the audience an eyeful, displaying their high kicks on a ring set up in the middle of the runway.

SOCIAL SWIRL SUPPORTS HAITI: Coast to coast, party people were out Wednesday night drinking for a cause. Thompson Hotels held “A Night to Benefit Haiti” bashes at both its Los Angeles and Manhattan properties. Adam Levine, Lake Bell and Scott Caan attended the Hollywood event where Samantha Ronson DJed, while Lily Donaldson, Vito Schnabel and Tinsley Mortimer hit up its Lower East Side counterpart where Mark Ronson spun records. In all, the parties raised $55,000.

At Modelinia’s soiree at Spin in New York, Susan Sarandon (who is a partner in the ping-pong club) was joined by Harvey Weinstein and Georgina Chapman, Hilary Rhoda, Judah Friedlander and Veronica Webb. The group raised $20,000 for charities Friend of the Orphans and St. Damien’s Hospital. A silent auction will continue through Wednesday, featuring lots such as VIP tickets to a Nick Jonas performance and a private movie screening. The auction can be accessed via Modelinia’s Facebook page.