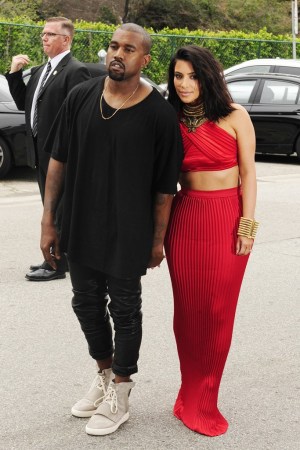 Party crashers are de rigueur at Grammy parties, but in an effort to cut down on interlopers — and still get press, of course — record label Roc Nation set up its pre-Grammy brunch step-and-repeat in the flats of Beverly Hills, while the actual fete took place at a private residence a few miles away in the actual hills.

That didn’t deter Big Sean, Nick Jonas, Jhene Aiko, or Haim from stepping in front of the cameras on Saturday, but the biggest photo op occurred when a black Mercedes arrived. Without actually setting foot on the black carpet, Kanye West emerged under a shower of camera flashes that paused briefly at his request to let Kim Kardashian adjust her red crop top. After the couple broke their no smiling rule, they got back into their car and cruised off to meet with Jay Z, Beyoncé, and Rihanna, who had skipped the arrivals.

Newbie Justine Skye said, “I’m looking forward to meeting Beyoncé. That’s the main goal. I’m not even going to cut around it. I’ve met her once before at the Made in America festival. But I feel like this is more of an intimate event so hopefully I’ll get to say a few more words to her.”

In between hugs from rapper B.O.B. and Janelle Monáe, Natasha Bedingfield gushed, “Rihanna is always the loveliest. She’s always the nicest female singer that I’ve met she’s just an angel. Such a gentle soul.”

But New Yorker Fabolous was just looking forward to Sunday’s show. “I really don’t go in the space to meet anybody, just to take in the weekend,” he said. “I want to see the actual performances because I’m a sucker for live performances. I definitely think the Grammys brings out some of the best.”