"Pablo" popped up at The Supermarket in Manhattan, a multipurpose concept space in TriBeCa. WWD captured the frenzy.

By Kristi Garced
with contributions from Misty White Sidell
on August 19, 2016
View Slideshow 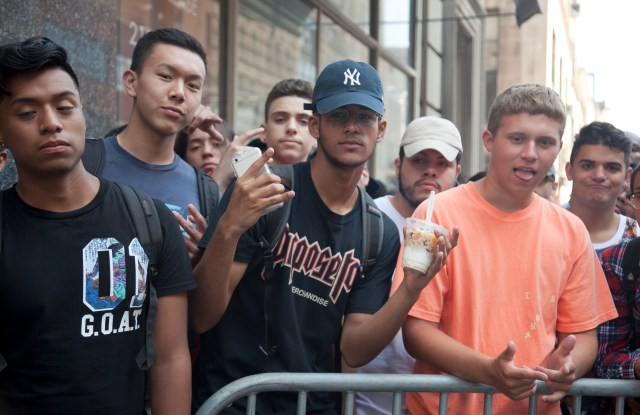 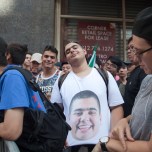 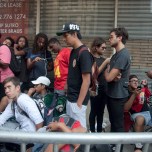 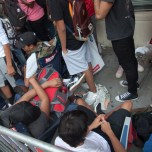 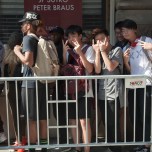 On Wednesday, the musician and designer took to his preferred medium, Twitter, to announce the opening of 21 global “Pablo” temporary stores this past weekend with a map illustrating the locations, 13 of them across the U.S. and others popping up in Melbourne, Sydney, Cape Town, Toronto, Berlin, London, Singapore and Amsterdam. Though West’s Yeezy Season 2 sneakers were not available for purchase, the shops offered cult T-shirts, long-sleeved shirts, jackets, hats and hoodies decorated in the signature Gothic-style font.

On Friday morning in Manhattan, “Pablo” popped up at The Supermarket, a multipurpose concept space at 393 Broadway in TriBeCa, with doors slated to open at 10 a.m. until 9 p.m. for three days. On Sunday, the store had slightly shortened hours, 11 a.m. to 6 p.m.

Shoppers — mostly young men — had been queued up outside of the store on Friday for several hours, a few resting in lawn chairs or toting blankets, boomboxes and umbrellas to protect themselves against the blaring sunshine and 88-degree heat. One superfan had been waiting for 20 hours.

Another shopper admitted he was only there to flip, or resell, the merchandise to make some fast cash. “I like Kanye, though,” he clarified.

At 10:30 a.m., the long line — and a solid police presence — was wrapped around Broadway down Walker Street, all the way to Church Street.

Darius, a 26-year-old photographer, had also been waiting overnight, though he managed to nap on the sidewalk. “I got out of work at 9 p.m. and I’ve been here ever since,” he said. “I haven’t had dinner. I’m gonna go get breakfast after this. I definitely want a T-shirt and a hoodie because we’re going into fall. I missed every other pop-up shop, so this is my one chance. You know, you kind of need somebody like Kanye that will push the envelope. I watch all his interviews, and I started to think to myself….The way Kanye thinks, it might just be the push that everyone needs. Kanye will push you. You can see that in his art.”

“We’re on vacation right now,” said Benny, a 20-year-old visiting from Florida. “I don’t even know what they’re selling, but it’s exclusive stuff, and I’m obsessed with Kanye.” His friend Jim, 19, didn’t exactly share the same fervor, though he’d been sticking it out for five hours anyway: “For me, there are other priorities [than Kanye]. But I mean, it’s the last day of vacation, and there’s nothing else to do.”

Mo and Val, a young couple aged 22 and 19, respectively, were both hoping to catch a glimpse of West. The college students had been waiting outside the space since 6 a.m. “Someone said Kanye was coming,” Mo said. “And apparently they were a reliable source. I doubt it, though.”

Some shoppers had traveled from Long Island, New Jersey and various other areas to get their hands on West’s cult merch and grew visibly impatient when the shop didn’t open promptly at 10 a.m., pushing their way through the doors as cops ordered them back in line.

For others, waiting was a cool breeze. A young woman named Milan had been waiting for about two hours, since 8:30 a.m. “It sounds crazy, but we’ve just been chatting, and it’s the most beautiful day, so it’s gone by pretty quickly,” she said. “I like the long-sleeved T-shirts. I buy them in XL and wear them as a dress. Apparently, in Melbourne, they did this thing where they give you only two minutes inside the store. You have to mark off everything you want on a piece of paper. You can’t even touch anything. You just cross-reference everything they have on a piece of paper, and then they give you your stuff and you leave. I don’t know if that’s how they’ll do it here.”

At West’s pop-up in Boston this weekend, New England courtesy was on display.

There was no frenzied mad dash, but rather a calm, collected scene where shoppers — admitted a civilized 10 at a time — thoughtfully assessed their purchases unhurried, while lending advice to others on what size, color and silhouettes best suited their physiques.

Located in the heart of Back Bay at 899 Boylston Street — the pop-up’s line extended a block’s length down Gloucester Street, sometimes curling around onto Newbury.

To help pass the time and condition shoppers for the experience inside, pop-up employees politely handed out merch menu pamphlets to those waiting.

“The hype is really awesome, this is a whole new type of fashion for people my age,” said Maya, a 16-year-old visiting from San Francisco. “I would [consider this high fashion] in a way, it’s so sought after and hard to find that it’s sort of a luxury product,” she said.

Eric, a 19-year-old Bostonian, went as far to say “Kanye is a God. Whatever price [the merch costs] is worth it.”

Whether intentional or not, much of the merchandise options appealed to Boston’s more conservative predilections. Shoppers like Nancy of Duxbury, Mass. appreciated that none of the products featured profanity or marginalizing verbiage as design elements.

In New York by Sunday at 5 p.m., with an hour left until closing and a light drizzle in the air, the line of shoppers wrapped around the corner of Broadway and Walker Street was considerably shorter and more civilized, with two allowed in at a time. Further down Walker Street, a group of young men were seen huddled together with clear shopping bags full of freshly bought Pablo merch, pulling the old buy-and-sell strategy for a couple of extra bucks, which they seemed to be pulling off with some success. For the ones buying, it posed the classic question of what’s more important: time or money?

Summing up the frenzy, one shopper weighed in: “Kanye is life.”