Kanye West Speaks Out About Fashion

“I’m beginning to be able to express myself,” the hip-hop artist said at the presentation of his second capsule collection for A.P.C. 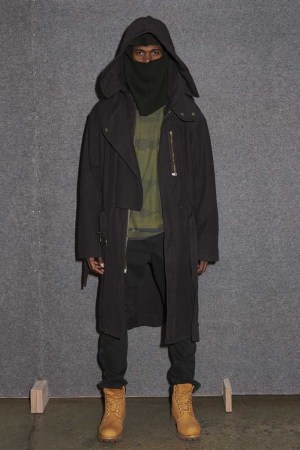 CANDID KANYE: A visibly nervous Kanye West spoke out Saturday about his learning curve in the fashion industry. The hip-hop artist, dressed in a white short-sleeve shirt and bleached skinny jeans, revealed his second capsule collection for A.P.C. at a presentation at the French brand’s Paris headquarters.

“I’ve done extremely big fashion shows before, which I will do again,” he said, admitting that his debut collection — which was panned by critics when it showed in October 2011 — “was kind of like me hopping in a Lamborghini and driving really fast.

This story first appeared in the January 21, 2014 issue of WWD. Subscribe Today.

“Jean is teaching me how to drive,” West said of his collaboration with A.P.C. founder Jean Touitou, which included a simple navy sweater, jeans and a fur-trimmed hooded parka more reminiscent of West’s personal style.

“I’ve had a bad education in fashion,” he admitted. “I learned fashion on Style.com.”

The Chicago native spoke of his art school education, and how much he hated being pigeonholed as a recording artist, which in the views of many does not give him credibility as a fashion designer.

“If I ever looked mad, I was,” he said, going on to describe the calming, maturing influence of having a family now, since the birth of his daughter North last year.

“I’ve been showing my ideas for 10 years on the front row of the runways.…Hip-hop is an expression of clothing. Some people don’t understand that,” he said. “I’m really happy with this [collaboration] because I’m starting to be able to express myself.”

As well as the capsule collection with West — the first edition of which reportedly sold out within minutes of going online last summer — Touitou’s fall men’s collection featured a series of looks that “remind me of elegant men,” the brand’s founder said.