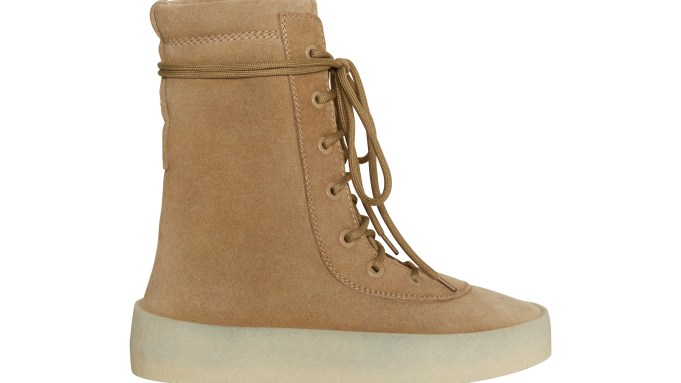 Shoe designs from West’s second Yeezy collection — which had shown at New York Fashion Week in September — will make their global retail debut on Monday.

The men’s and women’s styles have been assigned an unexpectedly moderate luxury price point. They range from $445 for a pair of suede heel sandals to $995 for over-the-knee knitted boots with an open toe. By contrast, West’s first footwear foray into fashion footwear — a 2011 collaboration with Giuseppe Zanotti — was priced in excess of $5,000.

The women’s styles, already spotted numerous times on West’s wife, Kim Kardashian, mostly come with a 4.5 inch heel. All heel styles were produced in Italy, according to the company.

The collection’s seminal style — the military crepe boot — will come in both men’s and women’s sizes. Made in Spain, the $645 shoe has already elicited much fanfare on streetwear culture web sites. The mid-rise, sneaker boots come fabricated in dune-colored suede with a rubberized sole.