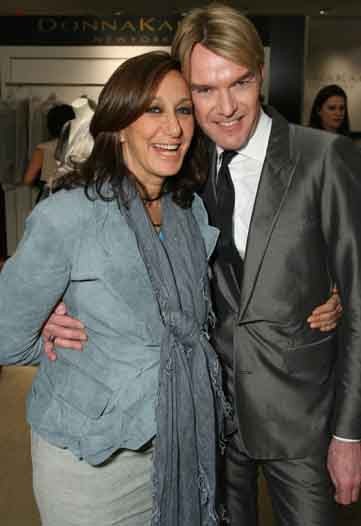 KARAN’S BON MOTS: Donna Karan flew out West on Friday for her first public appearance at Neiman Marcus Beverly Hills, during which she presented her spring collection to 90 customers with help from “my partner in crime,” Neiman’s senior vice president and fashion director Ken Downing. Underscoring her “real women” and “buy now, wear now” mantras, Karan addressed customers’ questions, which ranged from what to wear if you’re not a sample size to advice for those trying to break into the business. “There’s them and there’s us,” Karan told the crowd, referring to Downing and the pencil-thin models, then herself and her customers. “I’ll take you all shopping today and we’ll find you clothes.” She told one aspiring teen designer in the audience, “Work in retail first. It’s how I learned.” Based on the audience’s feedback, Karan also hinted she may introduce a custom color program for some of her classic styles as well as the metal accessories used to fasten her skirts and tops.

TIME TO PARTY: Judging from the amount of socializing going on at Baselworld, the clouds hanging over the luxury watch sector have started to lift. At Chopard’s 150th anniversary celebration on Saturday, the standing ovations kept on coming as Spanish tenor José Carreras and flamenco dancer Sara Baras treated the audience to several encores. Gucci, Bulgari and Omega were among the firms hosting cocktail parties on the sidelines of the fair. Tag Heuer brought some Hollywood glitz by wheeling out brand ambassador Leonardo DiCaprio alongside the Tag Heuer Tesla Roadster, a fully electric sports car housing its Pendulum concept watch. The vehicle is about to embark on a six-month round-the-world trip. DiCaprio, who donates his royalties to green causes, praised the company for highlighting environmental initiatives. “Tag Heuer has shown other companies that they can do good and make a profit at the same time,” he said.

Tag Heuer president and chief executive officer Jean-Christophe Babin revealed the actor had tried his hand at assembling a watch movement during a visit earlier in the week to the company’s factory in La Chaux-de-Fonds, Switzerland. “He was truly skilled yesterday at assembling the Caliber 1887, but the Pendulum maybe for a beginner was a bit too much,” said Babin, referring to the brand’s most recent innovations.

MOVIE MOMENT: It’s no secret Rodarte designers Kate and Laura Mulleavy have been toying with the movie business. They love their horror flicks, once picked their personal top 10 list of films for the prestigious Criterion Collection and recently signed up with William Morris Endeavour Entertainment to explore opportunities in the entertainment world. Later this year, the sisters’ fantastical creations will finally make it onto the silver screen in Darren Aronofsky’s “Black Swan,” which stars Natalie Portman and Mila Kunis as competing ballerinas. Few details about the costumes were available, but the movie features scenes from “Swan Lake,” for which the duo designed the ballet costumes.

FACE FORWARD: French actress Mélanie Thierry will be the face of the next Yves Saint Laurent women’s fragrance, the L’Oréal-owned brand said Monday, confirming a report in WWD on March 5. Thierry recently won a César (the French equivalent of the Oscars) in the best up-and-coming female actress category for her acting in “Le dernier pour la route.” The 28-year-old also has been in movies and in plays, including “Babylon A.D.” and “Largo Winch.” The new YSL scent is due out later this year.

PINK LADY: Flexing her decorating skills, Paris-based lingerie designer Chantal Thomass has taken over a house in the city’s Clignancourt flea market, until May 2, which she has filled with vintage objects hand-picked from stall holders in the site’s Serpette and Paul Bert markets. Pink sofas, fancy screens, chandeliers and Forties Venetian mirrors are among the pieces on offer, while the upper boudoir and bathroom spaces boast a copper bathtub and a lavish floral four-poster bed. Also on display is a selection of antique undies, lace and objects from Thomass’ personal collection.

KIDS’ TOWN: It’s never to early to teach kids about philanthropy, so, in that spirit, Global Action for Kids (the charity for which Angelina Jolie is the honorary chairperson) in conjunction with the stylish kids’ Web site Planet Awesome Kids held a fund-raiser on Saturday at Milk Studios hosted by Mary Alice Stephenson. Partygoers and their better halves and offspring, such as Brooke Shields, hair guru Ric Pipino, luxury bag designer Sang A and Agyness Deyn with Chihuahua in tow, reveled at the break-dancing troupe Kid Flash and Full Circle Soul, planted their own Jade plants and munched on Pop Burgers and Pirate’s Booty while posing for their own private photo shoots or awaiting face painting. Parents and kids alike perused the auction and sale goodies such as Kid by Phillip Lim, Little Lunalu and Ralph Lauren children’s clothes. And while Saturday’s unseasonably warm temperatures may have had many yearning for a park playdate, the mini forest maze set up by Brook Landscaping and Atlantic Nurseries did the trick for most.

FILM FASHION FEST: The inaugural La Jolla Fashion Film Festival, April 23 and 24 in the seaside hamlet, will be the first Stateside fest to focus solely on the short fashion film genre. Five shorts will make their world premieres: Jean-Claude Thibaut’s “The End,” Noam Griegst’s “Two Women and a Bear,” Janet Pytowski’s “Style Is Eternal” and Robertino Fonseca’s “Heads Will Roll.” In addition, Pamela Hanson’s short for Charlotte Ronson’s spring 2010 collection, “Tonight You Belong to Me,” will make its film festival premiere, as will others by Karl Lagerfeld, Marisa Crawford, Max Vadukul, Ellen Von Unwerth, Jamie Isaia and Michael Haussman.