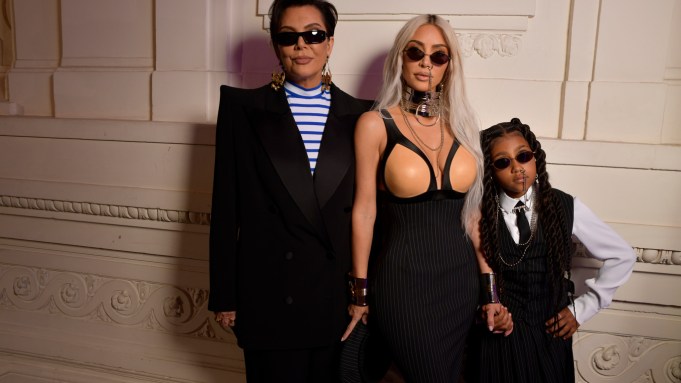 Kardashian attended with mom Kris Jenner, paternal cousin Cici Bussey and daughter North West in tow, making it a family affair. Kardashian walked earlier in the day at the Balenciaga show. “It was a nervous energy, but it was great,” she said of her morning stroll on the catwalk.

Jenner added that Campbell had come in for the day of shows. “This is her last night in Paris for a while,” she said, pointing to her mother. She looked down the front row. “We have quite the lineup, even Anna is here,” she said, referencing Vogue editor in chief Anna Wintour, who was seated next to Kardashian. Kardashian and West were wearing matching nose chains, which were featured on the runway.

Colombian singer Maluma was soaking up all the vibes, and gamely posing for pictures with everyone. “I feel it’s crazy but I’m very into the world of craziness,” he said. “I’m seeing so many characters right now and I feel that’s what Olivier wants to show, so I feel like he’s doing a great job.”

He was seated across from Gaultier himself, who sipped Champagne in his seat, as well as a couple of male models clad in nothing but Speedos who were charged with carrying the train of one guest’s gown.

The “Emily in Paris” cast was on hand, having a few hours of down-time fun after wrapping a late-night shoot at 4 a.m.

Lucien Laviscount sported a bit of a gash on the forehead, an injury left after being mowed down by an electric scooter on his morning run. “Listen, I’m trying to keep 100 right now,” he joked of recovering after the fall.

Still he harbors no ill will to the city or its unsightly transportation dangers. “The city is on fire. The city is already magical to me but with fashion week and to see everyone stepping out in what makes them feel good, it’s wonderful,” he said. “Since I landed in Paris for the first time last year, my feet haven’t touched the ground. Literally this whole place is a museum with the roof taken off, like I’m living in a magical world and I don’t want the dream to stop.”

While he gushed over the city he said he’ll be here filming until the end of September. There is a project lined up after that, but it’s still “a little bit hush hush,” he added.

Camille Razat, who has been living it up during fashion week attending Armani and last week’s Celine show, arrived arm-in-arm with Laviscount and sat next to castmate Ashley Park. They were loving the chaotic excitement of the room.

Park, who plays a sometime drag king with an eclectic style, said the show has influenced her fashion choices. “I’ve become a lot more bold and elevated in my choices because of the show,” she said.

She was wearing a vintage Gaultier velvet gown for the occasion. “This was love at first sight. I’ve never had something like this happen. It’s the first one I saw and it was ‘Let’s try this one first,’ and it fit like a glove,” she said. “It was destiny.”