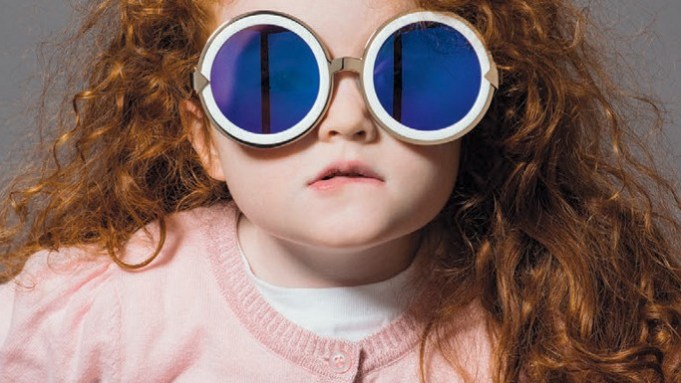 LITTLE KIDS, BIG SPECS: Karen Walker’s eyewear ads are consistently distinctive for their stark, minimalist portraiture and subversive campaign models. Case in point: for its first summer collection, the brand teamed with “Advanced Style” blogger Ari Seth Cohen and used women of a certain age — between 65 and 92, specifically — as its models. Now, for its second summer collection of eyewear, which launches internationally today, the brand has tapped a much younger set of faces, aged between 3 and 5.

“The campaign is about optimism and playfulness,” Walker told WWD. “The idea was always for [the collections] to be presented as bookends. The first campaign, that Ari [Seth Cohen] shot in New York, was based on eternal optimism — the bookend to that brings in the kids’ open-eyed, playful point of view.”

The children — Claudia, Tyler, Elise and Alice-Rose, shot by photographer Derek Henderson — each model one of the four new styles (the Siouxsie, the Underground, the Rowdy and the Peek-a-boo). “You have to go with the flow with kids as they kind of do their own thing,” Walker said. “We didn’t ask them to do anything specific, we wanted them just to be themselves — we were simply there to capture it.”

Inspired by a “cartoonish, toylike” sensibility, the collection features Walker’s signature exaggerated shapes and ranges from $330 to 350. It will launch on Sept. 5 at karenwalkereyewear.com and at stockists worldwide.