The designer did not comment on the controversy over his comments on TV last weekend criticizing German Chancellor Angela Merkel. 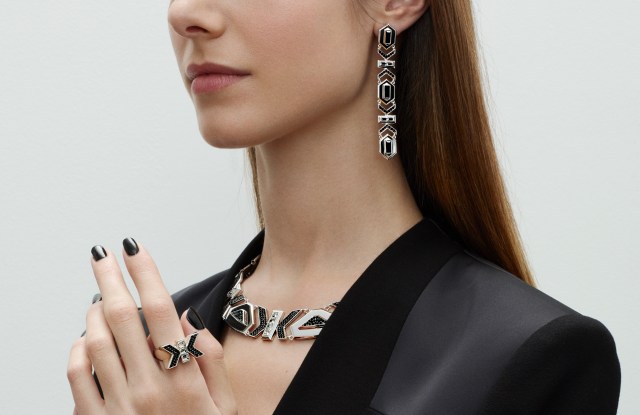 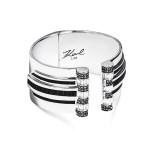 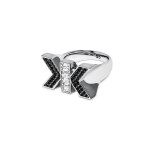 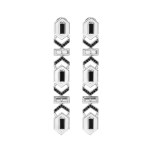 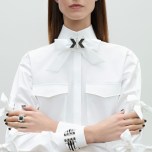 Karl Lagerfeld hosted an intimate lunch gathering at his Left Bank showroom on Monday to celebrate the launch of a limited-edition jewelry collection of six Art Deco-inspired designs as part of his ongoing collaboration with the Swarovski Group.

Consisting of a collar necklace, cuff, chandelier earrings, two oversized rings and a brooch, the collection is due to go on sale on Tuesday at Karl Lagerfeld stores in London, Paris, Vienna, Dubai and Düsseldorf, with prices ranging from 129 euros to 799 euros. It will also be available for preorder at karl.com.

Each design has been produced in a limited edition of 25, numbered and engraved with the designer’s signature on the inside.

“My favorite piece in the collection with Swarovski is the bracelet,” Lagerfeld said, referring to the cuff with graphic black bands. He declined to delve into the inspiration behind the designs, which feature geometric patterns and a graphic letter “K” motif.

“I never talk shop,” he shrugged. “Because [French philosopher] Voltaire said everything that needs an explanation isn’t worth the explanation — so you look at it, and what interests us is your judgment, not mine.”

The designer was happy, however, to run guests through his choice of accessories for the day: his signature Audemars Piguet Royal Oak watch; Shamballa sunglasses; a Nadine Ghosn necklace in the shape of earphones, and a Suzanne Belperron brooch set with a portrait of his cat Choupette.

The lunchtime conversation cycled through a dizzying array of topics, from Time magazine’s recent cover story on French President Emmanuel Macron to his diet (Lagerfeld has sworn off his beloved Diet Coke and now drinks coffee.)

The designer did not mention the controversy over his television appearance on French cable channel C8 on Saturday, during which he explained his recent cartoon for the monthly supplement of the Frankfurter Allgemeine Zeitung newspaper, in which he lambasted German Chancellor Angela Merkel.

Lagerfeld blamed Merkel’s decision to let more than one million refugees into the country since 2015 for the far-right’s strong showing in recent parliamentary elections.

“She already had millions and millions who are well-integrated, who work, which is great, because the population there is declining a little. But she didn’t need to let in another one million to improve her image, after coming across as the bad mother during the Greek crisis,” he said on the TV show.

Referring to the example of a Syrian refugee who reportedly praised the Holocaust in front of his German host, Lagerfeld suggested that some of the refugees arriving in Germany harbor anti-Semitic opinions. “You cannot, even if several decades separate the two events, kill millions of Jews and then bring in millions of their worst enemies afterwards,” he argued.

A highly informed and opinionated commentator on current affairs, Lagerfeld is no stranger to controversy. The lunchtime conversation did touch on the criticism unleashed by another of his cartoons, depicting Harvey Weinstein as a pig with the tagline “Do you know Harvey Schweinstein?”

German newspaper Die Welt said the drawing had anti-Semitic undertones, but Lagerfeld explained that he was inspired by the social media hashtag #BalanceTonPorc, which translates as “Expose Your Pig” and is France’s equivalent of #MeToo. “I only translated what everyone was saying,” he said.

In other tidbits, Lagerfeld revealed that Steidl had sold 3,000 copies of the catalogue he guest-edited for the Paris Photo photography fair, which closed on Sunday. The designer, who was sporting circular stickers on his ears, explained he was seeing acupuncturist Nadia Volf.

“She is treating me for a sciatica that I caught from spending too much time seated,” said Lagerfeld, who spends his mornings at home sketching. “It affects the way you walk, because you’re afraid it’s going to hurt.”

But back to that jewelry collection. Pier Paolo Righi, chief executive officer of Karl Lagerfeld, said the first collection designed under the brand’s multiyear licensing agreement with Swarovski has done well since going on sale in September, though consumers have not favored a specific category.

“I think it’s less the category, I think it’s more when they clearly feel and see the connection to Karl himself, whether it is individual charms that relate back to Karl’s life, or whether it is the collections inspired by a certain time that Karl likes and is associated with,” he said.

“We’re still looking not to overdistribute in the market. I think if we get to 300 or 400 points of sale next year, we’d be happy with that,” he said.

The Lagerfeld license is a first for Swarovski, but he suggested others could follow.

“This is new for Swarovski, so this is really about where Swarosvki goes in the future and how Swarovski can grow with a portfolio of very special curated brands that align with what we do best,” Russack said. “We’re very carefully looking at other opportunities.”